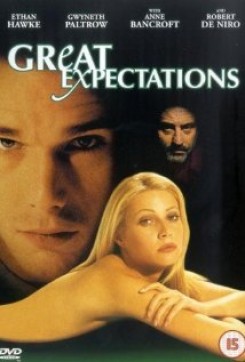 Great Expectations is a sad love story about Jimmy and Estella and how Estella consistently broke his heart throughout their lives.

There are several scenes where pelicans are seen in the water, walking or sitting on a dock, and sitting on the roof tops of houses. When Jimmy is a young boy, he is seen out in his boat and some Seagulls are seen flying over head. A fish is also seen swimming in the water near Jimmy's feet. At Estella's aunt's house, some rats are seen scurrying around the inside of a piano, a frog is on a lily pad, a parrot in a cage, moths around a light bulb, and a large cat sitting on an ottoman or on someone's lap. The animals were placed on there mark and cued with verbal and hand commands. There is a scene where a lady bug is seen crawling on Jimmy's finger before flying away. In another scene, Jimmy and his brother-in-law are out fishing and they catch what looks to be a shark. Jimmy is seen supposedly jabbing at the fish. A dead fish was purchased from a local fish market.