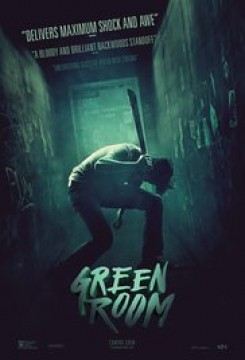 A punk rock band plays a show in a club owned by skinhead Nazis. After they witness a murder, they must find a way to escape.

Throughout the film, the antagonists in the film have dogs, which are seen performing such mild action as sitting/standing/lying, petted, and walking/running on or off leash. For all of these scenes, trainers used hand signals and verbal commands to cue the mild action, which the trained dog was accustomed to performing. The barking/growling was also a trained behavior.

In the scene when a man appears out of the shadows with a pit-bull, lets him go and the pit-bull attacks the actor, jumps on him and kills him, this scene was filmed in several shots and carefully choreographed sequences. Prior to shooting the scene trainers prepped the action with the stunt double. Just prior to action, the trainer instructed the actor on how to hold the leash and control the dog. On action, the trainer let the dog go at point A and another trainer called the dog with a toy at point B. The dog ran the trajectory. The same scene added the stunt double jumping over the bar to escape the dog attack. The dog never attacks the actual actor. Actually, the dog bites on the sleeve of a trainer who is lying on the ground playing that actor. Moreover, the dog that is eating the actor’s neck is not real. It is a mechanical dog that is being manipulated by a technician. A real dog was never near an actor’s neck.

In the scene where the dog attacks the actress and she hits the dog with a mic stand and the dog runs away, the trainer for the dog was standing in for the actress in this scene. The trainer’s leg was wrapped with a tug toy and burlap, which the dog is familiar with. On action, one trainer lets the dog go at point A and the other trainer at the top of the stairs calls the dog. When the dog arrives, the dog grabs on to the trainer’s leg and starts a game of tug. Trainer A grabbed the microphone stand which was made of Styrofoam and pretends to hit the dog over head multiple times, although she never actually hit the dog.

In the scene where the man leads the dog down a hallway and the actor turns up the speaker which makes a sound that scares the dog and the dog runs away, a trainer off camera elicited dog’s excitement by throwing around a tug toy. Trainer also used a sound machine with strange animal sounds to get the dog to show various surprised expressions. The sound was never above a certain decibel to harm the animal. When the dog ran away he was simply cued by his trainer to run to another point in the room.

In the scene where the dog pulls on a dead body, the actor was lying on the ground with a bite toy under hidden under the top of his t-shirt.  The actor also had a harness and drag line attached to him.  The dog was instructed to bite and pull the drag line.  On action, the trainer cued the dog to pull on the harness, and helped the dog pull the actor a few feet on the ground.