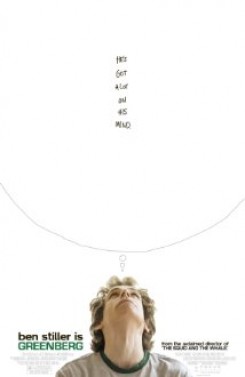 Roger Greenberg (Ben Stiller) leaves New York and goes to Los Angeles to house sit for his brother and try to figure out what to do with his life.

The Greenberg family has a pet German shepherd named Mahler, who is seen throughout the film performing such mild action as walking from one point to another; sitting or lying on the floor, bed or couch; interacting with actors or being petted; eating food and treats; playing with a Frisbee; and going for walks on a leash. For these scenes, trainers stood off-screen to cue the well-trained dog to perform the action, which it was accustomed to performing. All grounds were checked ahead of time for hazards, including the hiking trail, and indoor sets were secured. The dog that played the role of Mahler was not interested in the pool on one set, so trainers had an easy time keeping him a safe distance from the water. The dead "animal" in the pool was not an animal, but a fake fur prop made for this film.

All food and treats the dog ate on camera were deemed safe for consumption. The pizza was a prop. No actual medication was given to the dog — the actors either pantomimed the action or used a pill-shaped treat. The "beer" given to the dog was a colored water made to look like beer.

In the veterinarian's office, several animals such as dogs, cats and guinea pigs are seen on leashes, on laps and in cages waiting in the lobby. These animals were always either on leashes, in a comfortable cage or held by actors who had been instructed on proper handling. The animals never interacted with each other and were unfazed by the other animals' presence. The set was enclosed and secured, and trainers hid off-camera to get certain looks from the animals and later, retrieved them. Dogs were placed on their marks (in laps or on the floor) and cued to stay. Trainers cued the dog that played Mahler to lower its head and walk slowly to appear sick. For the scene in which Roger walks Mahler out of the pet taxi, the vehicle was not moving when trainers placed the dog inside, and the actor walked out of the van off-camera, with the dog on a leash.

For the scene in which the veterinarian performs surgery on a rabbit, the rabbit was a taxidermy prop that the production provided documentation for. For shots in which animals are seen in cages in the background of the operating room, these animals were placed in the room after the cages had been inspected and made comfortable, and there was only one animal per cage. For the shot in which Mahler is briefly seen lying on the mechanically lowered exam table, the dog was well-rehearsed for this brief scene. The dog was cued to lower its head as if it felt sick, and the actress who played the veterinarian pressed the controls to slowly and smoothly lower the table.