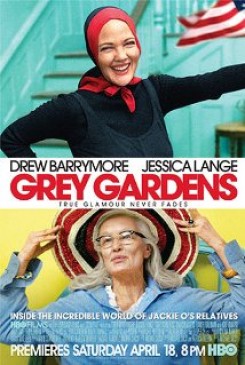 Edith Beale (Jessica Lange) and Little Edie Beale (Drew Barrymore), relatives of Jackie Onassis, retreat from society and move to their Long Island summer home, where they live in seclusion until a raid by the health department makes their whereabouts public. When Jackie Onassis learns of this, she comes to help them.

Only necessary cast and crew were allowed on the set. All cast and crew were instructed on the proper handling of the animals before filming began. Prop items strewn around the house, such as cans, bottles and newspapers, were all checked ahead of time to make sure there were no rough edges or anything that could harm the animals.

Several cats live at the Beales' house. Throughout the film, they perform such various mild actions as sitting or walking around inside and outside the house. The house always appears messy, with miscellaneous items and even cat feces all over. The feces were props. The cats sit, walk or lie on furniture and on the porch, yard and fence outside. These scenes were all filmed separately, but the action was achieved in the same way. The cats wore harnesses with lightweight monofilament lines attached. When the cats were placed on their marks, the lines were attached to parts of the furniture to ensure that the cats stayed. When the cats walked around the house, they either had longer lines attached to their harnesses or were allowed to act naturally as trainers stood off-screen. Baby food was also smeared near some of the cats to keep them on their marks. The exterior of the house was actually an enclosed set. In one scene, as the health department raids the house, a man picks up one of the cats and puts it in a cat carrier. The cat was placed on its mark right before filming began and the actor was instructed on the proper handling of the cat. A trainer retrieved the cat right afterward.

When a cat appears to urinate near a portrait on the floor, the painting was secured to the floor and the cat's monofilament line was secured to an eye bolt in the floor. A crew member hiding behind the painting held a tube attached to a pump and pumped some apple juice through the tube near the cat.

For scenes in which kittens are on the bed with the older cats, the adult cats wore harnesses with monofilament lines attached to the bed, and trainers placed the kittens on the bed near the actress in the scene right before filming began and retrieved them immediately afterward.

A raccoon walks around the corner of the room in a few scenes. The trainer placed the raccoon on the ground near some bread, and the raccoon was allowed to wander around the secured, enclosed room and eat the bread.