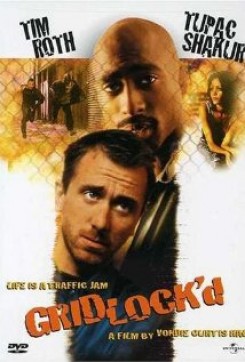 Gridlock'd is a film about Spoon and Stretch, two addicts, who decide to kick drugs after their friend Cookie ends up in the hospital, as the result of an overdose. They spend the entire day going from one Medicaid office to another trying to get into a government detox center.

There are two scenes where a blind veteran is seen with his dog at a Social Service building. On one occasion the man goes on a rampage, letting his Rottweiler off of his leash. The dog grabs a ladies handbag, tugging at it and growling at the crowd. Then the dog notices Spoon in a corner at the opposite end of the room and he starts running towards him. When a police officer notices the dog running away, he pulls his gun out and points it at him, just then the owner calls the dog to him. The dog runs over to him and sits down as the man puts on his leash. This scene was shot in cuts. The trainer released the dog and cued him with verbal commands from one mark to the next. On the second occasion, the man and his dog, on his leash, is seen in a rehab office. Other animal action consists of some pigeons seen flying from a building. American Humane was present on set to monitor the animal action.