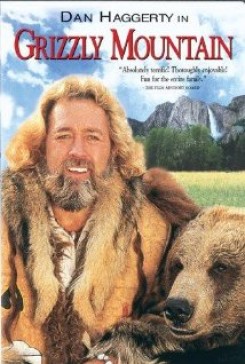 Grizzly Mountain is a dramatic story based on the conflict between progress and ecology. The story unfolds through the adventure of two twentieth century children who find a magic cave that transports them back to the 1870's. It was at that time that crooks first tried to destroy the mountain in a scheme to bring the railroad in and squeeze nature out. The children become instrumental in saving the mountain in the past and then saving it again in the present from modern community developers. The adventure begins harmlessly with a family outing. Bill Marks takes his wife and three children to picnic in the mountains outside of Portland, Oregon where he is investigating the site of a new community development. The land is finally being released from an old land lease agreement that gave the Indians rights to the land. With the lease expiring, the land will revert to the state and will become available for development. However, this is contingent upon Bill's approval. As he and his wife prepare the picnic, their two oldest children, Dillon and Christy, go off for a hike. On the hike, Dillon, 10 years old and Christy, twelve, venture into a cave. They experience what they believe to be an earthquake, but find they have been thrust back in time to the year 1870. Feeling lost and confused, they encounter Jeremiah, a kindly mountain man who takes them under his wing. They also encounter many of Jeremiah's friends, among them a grizzly bear named Jack, an eagle who comes when Jeremiah whistles and the entire local Indian tribe. Although Jeremiah tells them to remain in his cabin, they are too curious to sit still. In an attempt to find the cave again, they are chased by a mountain lion and rescued by an Indian brave on horseback. In the course of their explorations, they also discover that Jeremiah and the Indians are trying to save the mountain from being blown up to make way for the railroad. A band of bumbling crooks is planning to get rich at the expense of nature and the good people of the town. They use a fool's gold scam to get the support of the townspeople, convincing them that the area is bound for an economic boom and needs the railroad. However, the only ones who stand to become rich will be the crooks. Jeremiah tries to speak up for preservation of the mountain and buy some time. In the mean time, he sends one of the Indian braves to contact the Marshall for the territory in hopes of getting his support. As the story unfolds, we are taken back and forth in time to see the adventure of the children in the past and the frantic search for them in the present. The children want to help Jeremiah, not only to save the entire mountain, but also to save the cave in particular, so that they can return to the future. In sabotaging the crooks and the destruction of the mountain in the nineteenth century, they find parallels between that situation and the one facing them in the twentieth century. By the time the children are safely back in the present, Bill Marks has learned that progress may mean saving the mountain afterall.

Animal action is mild throughout the film and consists of horses, a mountain lion, a bear, an eagle, a raccoon, ants and a squirrel. There is also some stock footage of a bear cub, deer, birds and bears in a tree, which serve to define the mountain atmosphere. The scene where the Indian brave is saving the children from the mountain lion was shot in cuts. The children spy the mountain lion, react with fear and run away. We then see the cat running through the woods. Suddenly, an Indian brave on horseback rides into a clearing and lifts the chidren up onto the horse with him and rides away. We then see the cat slow to a walk and give up the chase. The horse and the cat were filmed separately. The shots of the cat were stock footage. In another scene later in the film, the brave is seen riding hard to get word to the Marshall about the crooks. The horse and rider are seen riding fast in open fields, through wooded areas, down a steep embankment and then swimming across the river. This action was shot in cuts and the actor was an experienced rider. The camera angles and editing made the ride appear to be more strenuous than it actually was. Other horses are seen throughout the film being ridden by individuals, pulling wagons or standing in the background as atmosphere. When Dillon and Christy meet Jeremiah's friend, Jack the bear, the scene was shot in cuts. We see the bear walk out of Jeremiah's cabin, stand on his hind legs and give a playful roar. In other scenes we see the bear sitting around or walking through the wooded areas. For all the bear scenes, a trained bear was used and shot in areas separate from the other actors or animals in the scene. The bear responded to his trainer's visual and voice commands and was rewarded with food. When we see flashbacks of Jack as a bear cub, stock footage was used. The children also are introduced to Jeremiah's friend the eagle. We see Jeremiah point out the eagle circling in the sky and then he whistles to the bird. The eagle flies down and lands on Jeremiah's gloved arm. Later in the film, we see Jeremiah call the bird from his open cabin window and the bird again lands on his arm. For these scenes, both stock footage and a live eagle were used. The actor playing Jeremiah is an experienced eagle handler. The bird was trained to make flight circles and return to the trainer who was present for all filming involving the eagle. Most of the flight shots were stock footage supplied by the local wildlife rehabilitation center in Grants Pass, Oregon, which also supplied the live eagle. In a scene where Dillon and Christy try to sabotage the cabin of the crooks, we see them putting ants all over a pie in the pantry. For this scene, both live and fake ants were used. Several live ants were gathered from the woods and placed for the scene intermingling with many more rubber ants. The live insects were collected after the shot and returned to the log in the woods from which they were originally gathered. A great deal of care was taken in handling the insects. In a final sequence in the film, we see the children, Jeremiah, the Indians and even the animals gathering the bundles of dynamite set by the crooks and then tossing them into the river. This scene was shot in cuts. When the animals are seen discovering the bundles, the animals were placed near the prop dynamite and photographed. We next see the bundles land in the water which creates the illusion that the animal tossed it.