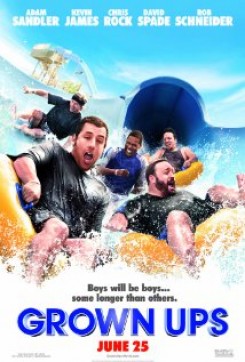 A group of childhood buddies who lost touch over the years reunite by spending a long weekend at a cabin together to attend the funeral of their former basketball coach and mentor. Now that they're older and have families, they reminisce about what has changed, while goofing off.

Cast and crew were introduced to the animals ahead of time and instructed on their proper handling. All streets were closed to traffic and the grounds were checked for hazards.

In this film, Eric (Kevin James) had a pet dog named Curly, who was played by a labradoodle named Harlan. For scenes in which the dog performs such mild action as walking from one point to another, sitting or lying on the ground or couch, or being petted, off-camera trainers cued the action. Contrary to appearances, the dog was never actually debarked — the barking sounds were added in post-production.

For scenes in which the dog is seen in a convertible, trainers stood just off-camera, and the actress held the dog's leash. The dog was well-trained, and the well-rehearsed actor slowly drove the car a short distance.

For the scene in which the dog has a cup over his nose, a trainer placed the cup on the dog's nose, loosely attached it with string, and removed it immediately after filming. A hidden trainer lay next to the dog under a bed (which was high enough to give the dog ample room to lie under it).

For the wagon scene, the dog was brought to the wagon on a leash and placed on its mark near the other riders. An experienced trainer drove the horse-drawn wagon a safe speed and short distance. The horses were from the same team and accustomed to pulling a rig that size.

During the town festivities, pony rides take place in the background. Each pony had its own trainer, and the ride was a typical pony ride catered to young children, which the ponies were accustomed to. The child riders were instructed on handling the ponies and trainers placed them on the ponies moments before filming.

During a game of "arrow roulette" (in which arrows are shot into the air to see who gets hit), everyone runs off except the dog, who is scooped up by Eric and placed on his shoulders. Eric runs with the dog on his shoulders. This scene was filmed in separate shots. Prop arrows were shot into the air without the dog present. A stuntman doubled as the actor for the scoop-and-run, being replaced by the real actor only for close-ups.

For a scene in which Eric first sees an injured bird, trainers placed the bird on its mark on the ground and allowed it to move at liberty, but since its leg was loosely wrapped with gauze, it appeared to be flopping on the ground. For the scene in which Eric's daughter rescues the bird, puts it in a shoe box and nurses it, trainers placed the bird in a padded shoe box with its wing loosely wrapped around its body with gauze. The bird's leg was equipped with a monofilament line to keep it from flying off. The child actress had been well-rehearsed for the action and the feeding tube was a prop (the bird never drank any milk).

The moths in this film were props. Production provided documentation for them and for the deer wall mounts.