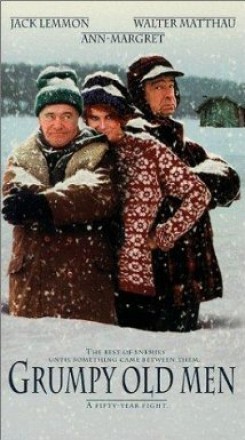 In this sequel to Grumpy Old Men, John's daughter, Melanie, and Max's son, Jacob are planning to wed. Added to all the mayhem of planning the wedding, a new woman moves into town. Since John married Aerial, the last new girl in town, it is now Max's turn to snare the gorgeous newcomer. The only problem is that she has come to town to open a restaurant that could threaten the two chums' favorite fishing spot. When the owner of the bait shop, Chuck, died the previous year, he left the shop to his cousin, Maria Ragetti. Maria is a sixty-year-old, gorgeous, olive skinned, Italian, whom Max is instantly attracted to until he finds out that the bait shop is being turned into an Italian restaurant. After Max tells John about Maria and her intentions for the bait shop, they decide to change her mind. The two use all the pranks that they normally inflict upon each other on Maria. They try everything from putting a guinea pig inside the restaurant during a health inspection, to putting up condemned signs in front of the building. In the middle of all this, the old codgers surprise Melanie and Jacob by planning their reception. Unfortunately for everyone, their good intentions bring conflicting emotions into the couple's relationship and Melanie calls off the wedding. As one would expect out of these two grumpy old men, one blames the other for the kids' break-up. The truce is over and the gloves are off. Once again they are up to their old tricks of seeing who can out prank the other. Their shenanigans include cutting fishing nets and pitting their pets against each other. But in the end, it is the love of family and an infamous fish that bring these two friendly old adversaries together once again.