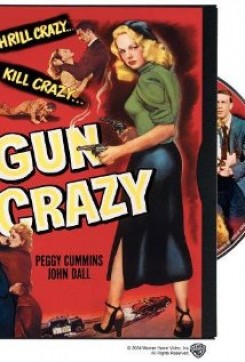 Gun crazy portrays the story of Anita, an attention-starved teenager, who has been emotionally and physically abused in the past. Anita lives in her mother's trailer and has been left in the care of her mother's boyfriend, Roonie. Anita's mom, who is a prostitute, took off to San Francisco to try and make some quick cash, but has not returned in some time. Roonie, a slob, pig of a man, has been forcing Anita to have sex with him while her mother has been away. Anita agrees to this, as well as to all the other boys that approach her, as she is completely starved for any love and/or attention, in any form. One day, while in school, all of Anita's class is given the assignment of acquiring a pen-pal. Anita's pen-pal ends up being a convict in Chino State Penitentiary, Howard. They continue to correspond and, with all of the attention they are both getting from one another, they fall in love, via mail. Howard informs Anita he will be getting out in a couple of days and then they can be together. In his letters Howard expresses his intense interest in guns, so Anita takes Roonie's guns from the trailer and begins to practice. Roonie returns home after work to find Anita practicing, and is impressed with the girl's ability. He helps her with her lessons but, once again, he forces himself on Anita. The abused Anita has had enough. She takes Roonie's gun and kills him. She quickly hides the body outside, as Howard is due in town very soon. When Howard arrives Anita picks him up from the bus depot. They decide to be married right away. On their wedding night Anita confides in Howard and tells him of Roonie's body. Howard devises a plan to get rid of the body, but they are stumbled upon by some of Anita's schoolmates, which leads to more killings. They are in too deep now and are forced to flee the small town. We follow these hopeless lovers as they try to escape the inevitable.

In one scene, while Anita and Howard are in a backwoods church, the preacher opens a box which has snakes in it. He reaches in and passes the snakes around to all of the people to touch and hold. These were all non-poisonous snakes which were accustomed to being handled. After church has ended and all have left, the preacher takes his favorite snake out of the box, a rattle snake, holds it up and talks to it. You are led to believe that the snake bites him in the face, causing the man to throw the snake down. This scene was shot in cuts with both a live and dead snake being used. It was the dead snake that was thrown to the ground. In another scene, as Anita and Howard are driving, Howard barely misses hitting a dog which is in the middle of the road. This, too, was shot in cuts with the car never being close to the dog. This dog is seen in later scenes eating his dinner, barking at Howard and sleeping. Ants are also seen crawling across a table. This was stock footage.