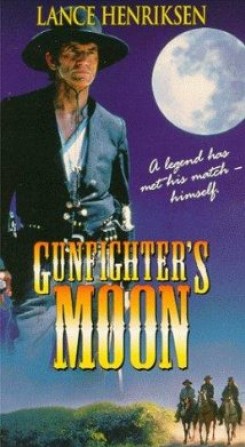 Gunfighter's Moon is a cowboy story that tells a traditional story in the year 1877 in Colorado and Wyoming. It starts with two horsemen galloping their horses on a hill in the distance. The plot begins with Frank Morgan in bed with his girlfriend. Western Union delivers a telegram and he starts packing to leave. Rosa, his girlfriend, is begging him to stay because she fears he will never return. The telegram is from his former wife asking him to come to her in Wyoming. Frank has quite a reputation as a gunfighter that his former wife, Linda, now needs. Frank leaves in haste and arrives in Wyoming five days later. His first visit is to the local bar. In the bar he is immediately challenged by two brothers, gunfighters who don't think they are amateurs. Morgan has to kill one of them to survive and is about to kill the other one that he has wounded when a woman in the bar begs him not to kill him, so he doesn't. The plot thickens when Morgan's previous personal life is soon revealed. He and his wife had a daughter who is now a pretty teenager and Morgan eyes her walking down the street after the bar episode. He can tell she is his daughter, but soon finds out that she thinks her stepfather is her only father. Linda had told her that her father died a hero's death in the war; she told the same story to her husband, Jordan. As a result of her lie, Jordan thinks he has to be a hero and as the acting sheriff he is trying to be a tough, authoritative sheriff with some bad and lawless guys in the town who are unresponsive to his words and out to kill him. They have succeeded in killing the sheriff before him. Morgan is secretly met by Linda and she tells him the details of why she sent for him. Jordan naively thinks the town will back him up in his efforts to run the toughs out-of-town. Linda has no illusions about the town people backing him up and she has asks Morgan to help. Morgan can't say "no" to Linda although he isn't too happy that she told their daughter, Kristen, that he was dead. Morgan gets acquainted with Kristen's boyfriend, Spud, when he finds him practicing his "fast draw" and Spud thinks he is real good at shooting until he sees Morgan shoot. Morgan quickly realizes that his other mission is to make sure Spud doesn't continue to be drawn to a style of life that is definitely not glamorous. He wants a safe and stable life for his daughter. Finally, the big event comes and Morgan prevails. He kills the bad guys and only gets wounded. And, from this experience, Spud realizes gunfighting is not for him. During his time in the town, he has seen Spud quite a few times and usually with his daughter. Kristen likes Morgan and talks to him about herself. As he is leaving town on his horse, Kristen makes eye contact with her mother as they are waving "good-bye" to Morgan. She strongly suspects that her mother has lied to her and he is her dad. She asks her mother point blank and she tells her that he is her biological father. Morgan rides off into the sunset.

There is a chameleon on the wall of the bedroom when Morgan is talking to Rosa as he packs to leave for Wyoming. A medium size mongrel dog gets up and walks away when Morgan first enters the bar. Horses are used throughout the film. In one of the many street scenes, a horse rears up on his hind legs with a rider on him. At another time, a horse is seen briefly standing in the rain. At one point near the beginning of the film, two horses with riders start to go into a creek.