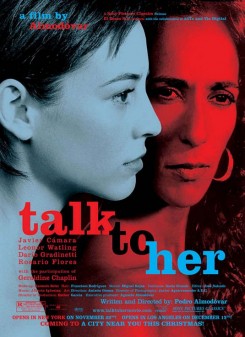 Hable Con Ella translated as Talk To Her is a dramatic film directed by award winning Spanish filmmaker, Pedro Almodóvar. It is the story of two men whose lives cross by virtue of their love for two women who are similarly locked in a state of coma. Benigno (Javier Cámara) is a male nurse who loves and cares for Alicia (Leonor Watling), a young ballet dancer struck down in an automobile accident and languishing in a coma. In the same hospital, Marco (Darío Grandinetti), a writer, watches over his lover Lydia (Rosario Flores), a bullfighter by profession who has been gored and also lies unconscious. The lives of the four characters intersect and weave a complex tale of love where the boundaries of reality and the unpredictability of destiny are explored. As noted by producer Agustín Almodóvar, it is an "intimate and baroque film dealing with communication and the solitude of couples.

There are several controversial scenes in the film that show Lydia before her attack as she performs in the bullring. In a brief but graphic bullfight sequence early in the film, Lydia appears in the arena fighting a wounded bull. Later in the film, another bull charges her, knocks her to the ground then gores her.

American Humane was not present during filming since this was a foreign production filmed in Spain and France. After the film was completed, Sony Pictures acquired distribution rights for the United States. The jurisdiction of AHA's Film and TV Unit is the protection of animals in U.S. productions and monitoring the level of care they receive during production. We respect the rights of artists to tell their stories and do not condone nor criticize content. With respect to foreign productions outside of our jurisdiction, the differences in cultural attitudes toward animal welfare, local laws and customs present additional challenges.

Although AHA accepts the use of non-fictional footage in the telling of a fictional story, we cannot condone the manipulation of a situation that results in jeopardy to an animal for the sake of entertainment. When scenes appearing to place an animal in jeopardy are required for the storyline, AHA Guidelines state that they should be simulated. As the oldest national non-profit organization that protects both children and animals from cruelty, abuse, neglect and exploitation, American Humane condemns and opposes all blood sports, such as bullfighting, cockfighting, bear wrestling, etc., and calls for an immediate end to legal acceptance of blood sports and for strong enforcement of laws in the U.S. that now exist banning these brutal activities.

The bullfighting sequence early in the film is graphic and the animal's injury and distress are apparent on screen. For this reason, we are sensitive to the criticism of the film from animal welfare groups worldwide. However, AHA requested a screening of the film, outtake footage, and documentation regarding how the action was filmed to determine whether intentional cruelty occurred solely for the sake of the film.

After screening the film, AHA consulted the production and researched how the bullfighting scenes were accomplished. Production was cooperative in supplying AHA information on how the scenes for the film were shot. The following is our understanding of the production process based on our investigative research.

Bullfighting is legal in Spain. AHA understands that production was in compliance with all local, regional, and government regulations and obtained permits for filming from the Comunidad de Madrid and Dirección General de Turismo, authorizations to use the arena from local authorities, and certificates from the breeder of the bulls, the medical director of the arena, ambulance supplier, Colegio de Veterinarios de Madrid and from Frivalsa, the company in charge of incinerating the animals as required by law after the advent of mad cow disease.

Allegations came to the attention of AHA that Amnistia Animal filed a complaint stating that the production violated the Law for the Protection of Domestic Animals of the Community of Madrid. The law states that "the shooting of scenes with animals for film or television, that imply cruelty, abuse, or suffering, shall require previous authorization of the Community of Madrid, and that in any case, the pain inflicted on the animals be simulated." Production supplied the court with full documentation and the Community of Madrid determined that the complaint be rejected because, " as the law states clearly in articles 4.2 a & b, bullfighting events are explicitly excluded from this law.

According to the producer, the filmmaker recorded a session that was part of the training of a young bullfighter. Allegations that this bullfighter was an inexperienced student and therefore caused the animals' greater suffering were made to the press. Production stated that the novillero chosen for the filming, Juan Antonio Alcoba, had previously performed before an audience and is in preparation to take his "Alternitiva." The "Apoderado," his advisor, Macareno, was present throughout filming. Per the producer, "El Deseo chose the bullfighter in consultation with Macareno. Although some physical aspects were obviously taken into consideration, Mr. Alcoba was chosen for his experience and based on the recommendation of Macareno. Mr. Alcoba, as a novillero, has performed in a number of public "novilladas" around Spain, and is anything but inexperienced."

Bullfighting, as a professional sport in Spain, involves levels of training that are comparable to leagues in other sports. After a young bullfighter leaves the Academy, he becomes a "novillero" and enters a level of standing in the profession that requires him to perform in second-class arenas in the presence of an "Apoderado" or advisor. The term "novillero" is derived from the word "novillo" which means small bull and at this stage of his preparation the novillero will only fight bulls of a certain age and size. It is not until he passes his "Alternativa" that he becomes a full-fledged "torero" which then allows him to fight in major arenas with large size bulls.

The character of Lydia is portrayed as a skillful and successful torera and for this reason a credible bullfighter was chosen to double for her in the actual bullfighting sequences. The producer has stated that, "The art of bullfighting is meant to be almost a dance between the bull and the matador, and the bullfighter always tries for any of the different events to be as smooth as possible. Any perception from the audience that the bullfighter is inflicting excessive pain on the bull is damaging to his performance and reputation.

Production also noted that Mr. Alcoba, like any other bullfighter, had a "Cuadrilla", composed of "Banderilleros" and "Picadores" who assist him at the different moments of the corrida, and who are also there to assist him in case of an emergency. There was no other bullfighter present for filming. Several cameras were set up around the arena to document the corrida. The actress who appears to be fighting the bull was never in the ring with the live bull.

Production supplied outtake footage and AHA was able to verify that the face of the actress was digitally superimposed over that of Alcoba in post-production. All of the shots that were filmed with Ms. Flores in costume in the bullring were done in the arena after the actual bullfight and utilized a "fake bull" which consisted of a cart with a false head of a bull mounted on it.

Allegations that production used infirm bulls were also brought to the attention of AHA. Per production, the use of infirm bulls would not be allowed, nor would it be safe for the bullfighter. In a statement from El Deseo, "an infirm or blind bull would never be fought by a bullfighter. A bull may be rejected for any of the major arenas for a wide variety of reasons, including their being slightly under or overweight, or because their horns are of different length or width from each other. This does not make them unfit for the fight, but these sort of aesthetic considerations do make them less desirable for the major events, so often they are sold by the breeders for the training sessions." Bulls used for the filmed session had been selected by the advisor, Macareno, prior to any filming request.

AHA has been informed that the scene where Lydia is gored by the bull was also a combination of non-fictional footage, prop dummies, and post-production editing.

In looking at the film and the documentation provided by production, AHA has determined that the production appears to have filmed within the legal parameters set by the local and regional government agencies in Spain. It also appears that the filmmakers did not conduct the bullfighting sequences solely for the sake of the film. Although bullfighting is legal in Spain, AHA's position remains opposed to blood sports in all its forms and views the scenes representing cruelty as documentary in nature.