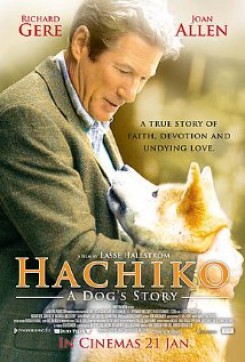 Hachiko is an American adaptation of a Japanese tale about a very loyal dog who accompanies his master to the train station every morning and returns each afternoon to greet him.

General safety precautions were taken on all of the sets. All streets were blocked to traffic while filming. All fences were checked to make sure there were no sharp edges. For shots in which the dog is seen in a shed, the area was inspected for debris, and dog beds or blankets were placed on the ground for comfort. The shed was kept at a comfortable temperature — heat was turned on when needed. For scenes at the train station, trains were stationary whenever an animal was on the set; the only time animals were allowed near moving trains is when actors held them. For scenes in which Hachiko ("Hachi") walks on train tracks, off-camera trainers walked alongside the dog and cued the mild walking action. The dog's pathway was cleared of debris beforehand. For shots that included a barbeque grill, the dogs were kept a safe distance from the grill.

For scenes in which the dog performs mild action, such as sitting, lying down, walking on stairs or near actors, being held, or walking from one point to another, trainers placed the dog on its mark and stood off-camera, using hand signals and verbal commands to cue the action. The well-trained dogs were accustomed to these actions. For "fetch" scenes, treats were scattered around near a ball to get the puppy to pursue the treats and ignore the ball. For scenes in which a puppy or dog licks a person or object, dog food or baby food was used to entice the dog to lick. All food used was deemed safe for canine consumption and takes were limited to avoid overfeeding.

Falling snow and freezing rain seen in the film were effects added in post-production. Snow seen on the ground was natural. The breed of long-haired dog used for the film is comfortable in this weather; however, as an added measure of comfort, the dogs were warmed and rested after outdoor scenes.

For scenes in which Hachi is seen in a backpack, a leather backpack was lined with a blanket and trainers placed the well-rehearsed puppy inside with its head poking out. For the scene in which Parker (Richard Gere) takes the puppy out of the partly closed backpack, the puppy was only inside the pack for a brief moment, and the opening allowed for plenty of air circulation. For scenes in which Parker holds the puppy under his arm outdoors, the puppy was first bundled in a blanket and then tucked under the actor's coat for added warmth.

For the scene in which Hachi goes through the train station in a carrier, the puppy was placed in a bamboo pet carrier, which had a blanket inside for cushioning. The carrier was secured to a pile of suitcases with luggage straps tied to the carrier and attached to both the bottom suitcase and a rolling luggage cart. Trainers rehearsed this scene at a slow pace to get the puppy accustomed to the action, and once trainers knew he was unfazed by the movement, the actor pulling the cart was instructed to slightly increase the speed. The tumbling of the carrier onto the ground was filmed in separate takes. Monofilament lines were rigged to the sides of the carrier, and crew members pulled evenly on both sides to help control the tumble. The carrier did not fall the entire distance to the ground; it fell a few inches onto blankets held by trainers. For the landing, the locked carrier was dropped from a couple of inches above the ground. Once the carrier was positioned on the ground, the dog was cued to exit through the carrier door, which was rigged to open easily.

For the scene in which the puppy is first on the platform, trainers placed the puppy on its mark and used a buzzer and verbal cues to get it to stay. The actor used his feet to help block the dog and prevent it from walking away, and several trainers stood nearby. Trains did not move while the puppy was on the platform. The noise of the train station was only as loud as an air conditioner.

The scene in which Parker hides Hachi near his feet on the moving train was filmed inside a closed and secured moving train car. The puppy sat inside the mostly open backpack and drank from Parker's cup, which contained watered-down milk.

For the scene in which Hachi paws at a piano pedal, trainers hid food at the top of the pedal but just out of reach, causing the puppy to extend its paw for it. He was rewarded immediately after.

For the scene in which Hachi stands on an architectural model, trainers placed the puppy on the paper model and scattered pieces of the model around, making it appear as if the dog had destroyed it. Treats were placed on the paper to get the puppy to chew.

For scenes in which Hachi opens a gate, an off-screen crew member held a monofilament line attached to a piece of fence. When the dog was cued to paw at or nudge the gate with its nose, the trainer pulled the line and opened the gate.

For scenes in which Hachi roams the streets or sidewalks, trainers walked the leashed dog to its mark and stood off-camera, cuing it to walk in certain directions and retrieving it at its end mark. For shots in which Hachi jumps onto Parker, trainers cued this mild action and the actor rewarded the dog with hidden treats.

Several dogs are seen in cages in the city shelter's mobile animal vehicle. Trainers placed one dog in each clean cage and secured the doors shut. The actors who held dogs were instructed on their proper handling.

Hachi jumps onto a garbage container and over a fence. Trainers verbally cued the dog to run across the yard and onto an upside-down wheelbarrow secured to the ground, and then onto a garbage bin, ultimately jumping over a fence and onto soft stunt pads below. This was filmed in only one take so as not to tire out the dog.

For a scene in which Hachi and Parker take a bath together in tomato juice, trainers placed the dog in the diluted tomato juice, which was only about 10 inches deep, after the actor was already in position. A nonskid mat lined the bottom of the tub and a thicker mixture of tomato paste was placed on the dog's coat. The actor and off-screen trainers helped keep the dog in position, and the dog seemed to enjoy it so much that he happily licked up some of the tomato mixture.

For a shot in which Hachi is in the back of a vehicle as it drives away on moving day, a trainer cued the dog to get inside the vehicle and stay on its mark. The trainer hid inside the car.

A baby hits Hachi repeatedly with a stroller. The baby was only present for the early part of the shot, in which no dog was present. For a close-up shot, a trainer gently tapped the dog with the lightweight stroller (with no baby inside) a few times, and the dog was not fazed by this mild nuisance.

For shots in which Hachi walks under stationary train cars and rests there, one trainer hid under a nonworking train (on inactive tracks) and another trainer cued the dog to crawl under the train, put its head down and stay down. Sharp rocks and debris was removed from the area beforehand.

The scene in which a poodle approaches Hachi was filmed in split screen. The two dogs were not on the set together. A rehearsed actress held the poodle's leash, which extended about 15 feet, while an off-camera trainer called the poodle to come.

Elderly Hachi sits outside the train station having flashbacks, then closes his eyes. The dog wore nontoxic makeup and trainers placed small, warmed magnets on its ears and tail to weigh them down slightly and make him appear older. Once the dog was in a "down and stay" position for a few minutes, it naturally became sleepy and closed its eyes. The flashback of Hachi and Parker running along a stream was filmed in a park; trainers cued the dog to run near the water. Sharp rocks and debris were removed beforehand.

Parker finds Hachi in the garage, spooked by a skunk. This scene was filmed in separate shots. The skunk's owners removed it from a crate and placed it on its mark on leaves in the driveway. For a shot in which the skunk stares down the dog, the skunk was equipped with a monofilament line, and kibble was hidden under the leaves to entice the skunk to stay. Trainers stood near the dog, a great distance away from the skunk and cued the dog to stay. The two animals had been given ample rehearsal time to become familiar with each other. For a shot in which Parker sweeps a broom near the skunk, the animal was conditioned to the presence of the broom and was not fazed by it.

In trying to capture the skunk, the characters throw a box on it. The box was only placed over the skunk for a brief moment. To simulate the skunk spraying, the skunk's owners placed a monofilament line on its tail and lifted it; the spray was added later as a special effect. Finally, for a shot in which the dog jumps, the well-trained dog was cued to jump a short distance over a crouching actor's shoulder.

While filming a scene in a bookstore with Hachi and a cat, the actress holding the puppy got closer to the cat than intended, and the cat swatted the puppy in the face. The swat was an unexpected reactionary behavior. The American Humane Certified Animal Safety Representative™ immediately intervened and assessed the situation, concluding that the puppy was not at all hurt or scratched; in fact, the puppy seemed unshaken. The American Humane Representative deemed it safe to resume filming with the animals, taking all measures to ensure that this type of action did not happen again — including keeping the animals a safe distance from each other for the remainder of filming. However, the production decided to use the take in the film.

For a scene in which a cat in the train station bookstore watches Hachi, a trainer walked the cat on a leash and released it on its mark, cuing it to stay. The cat then looked out a window for this brief and mild scene. The bookstore door was closed and trainers stood nearby.