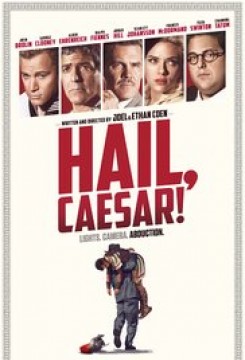 A special fixer in the studios tries to find out what happened to one of their stars who was kidnapped.

In the scene where we see two actors, one driving a chariot being pulled by two horses, and another man flanking him on horseback, the actors were prepped on how to drive the chariot and ride the horse respectively. The actor was never really driving the chariot, a driver is on the chariot, but you can’t see him, he’s hidden.

In the scene where the actor engages other men in a mock Western gunfight, which includes incredible stunts and horsemanship, professional stunt riders performed all the stunts. This sequence was shot over several days and included many quick cuts to make it look seamless. In the scene where the man calls his horse, the horse trots over and he jumps on his back, the horse never galloped, merely trotted, and did so for the length of a hundred feet. A step was provided for the stuntman to step on before leaping on the horse. The horse was conditioned to this kind of stuntwork.

In this same sequence, when the actor rides under a large tree branch, does a handstand, jumps on the branch, then shoots another man off his horse, they shot this sequence in small intervals. First they filmed the man riding the horse. Then they filmed him doing a handstand on the horse. Finally, they filmed him pulling himself on the tree. They will cut it together in post.

In the scene when the man enters the house and a small dog barks at him, a trainer was standing off camera cuing the dog with hand signals and treats.

The goldfish in the large aquarium in the Japanese restaurant were checked continuously. AHA Representatives made sure the aquarium was clean and was using a good filter.

In the scene where a maid hands out sandwiches on a tray and the dog jumps up and down trying to get to the food, trainers used two different dogs to elicit the reaction of the dog jumping for the food. The trainer rehearsed with the dogs, getting them excited about the scent of the food. When the tray was lowered, both dogs separately jumped for the food.

In the scene where the actor walks into the house and sits down in his Julius Caesar outfit and the dog licks his sword and runs in circles, production placed baby food on the edge of the sword prior to filming the scene. Then the trainer gave the verbal and hand signals for the dog to “go,” at which time the dog ran around in circles.

In the scene where we see dailies of the film and we see goats in the background, trainers brought the goats to set and kept them in position by spreading feed in the vicinity.

In the scene where the men are on a rowboat in the Pacific Ocean in rough waters and fog and one of them men is holding the dog, this was actually shot on set. The lake was man made and in a studio. The depth of the water was eight feet and trainers were on hand at all times. A wave maker was used. The actor was prepped on how to handle the dog by the trainer.

Subsequently, it appears as if the man holding the dog in the rowboat throws the dog into another man’s arms as he’s climbing the side of a submarine. The man catches the dog and drops a briefcase. First, they filmed the actor holding the dog and one step down the external ladder on the submarine. On action, the actor stepped up to the top of the submarine with the dog.  He faced the rowboat in the water with dog in his arms and spoke. Baby food was applied to the actors chin so the dog would lick his face.

When the dog appears to jump into the man’s arms, a crane camera was directed to the bow of the boat which gave a head shot of the dog jumping. The trainer was standing on the platform and used a buzzer and a food cup to entice the dog to jump. She made two jumps that made it to the platform. She was never in any danger. Another trainer was in the water to make sure to grab her if she fell in the water, which she never did!