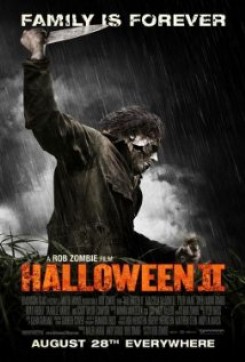 Michael Myers (Tyler Mane) returns to the town of Haddonfield on the anniversary of his massacre with a family reunion planned that Laurie (Scout Taylor-Compton) will never forget.

Cow As some coroners ride in a van, they hit a cow and kill it. The cow was a prop, for which the production provided documentation. Horse In a dream sequence, a woman stands with a white horse, holding its reins. The trainer placed the horse on its mark next to the well-rehearsed actress on a road and stood just off-camera. The actress held the reins. She was instructed on the proper handling of the horse before filming began. The street was closed off to traffic and the area was checked ahead of time for safety. Dog Two guys drive a pickup truck with a dog in a cage in the back of the truck. As the men and Michael Myers fight, the dog barks, still in the cage in the parked truck. Myers then goes to the cage and kills the dog with a knife. He cuts it open and eats some of its guts. A trainer placed the dog in the cage in the back of the truck and the well-rehearsed actor drove the truck carefully about 30 feet before stopping. The dog remained in the cage and an off-screen trainer cued it to bark at the actors. For the shot in which Myers approaches the dog with a knife, the dog was cued again to bark and growl at the approaching actor. The live dog was then replaced by a prop for the killing and gutting portion of the scene. Production provided documentation on the prop dog and guts. Due to late notification or limited resources, American Humane did not monitor the scenes showing the petting zoo, the horse in the hallway or the child holding a dog.