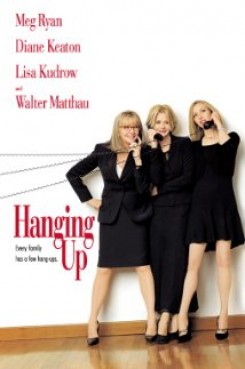 Hanging Up is a family bonding story by the writing team of Nora and Delia Ephron. In this poignant comedy, three sisters, Eve (Meg Ryan), Maddy (Lisa Kudrow) and Georgia (Diane Keaton) are forced to iron out the bumps in their relationships when their father (Walter Matthau) falls ill. Creature feature is Maddy's pet dog that is happy to chew on everything from the furniture to the phone.

Maddy is the youngest of the sisters who is happily on vacation when Eve tracks her down by phone to tell her about their father's failing health. Maddy returns home with her new love – a huge Newfoundland "puppy" that she names Buck. Buck appears throughout the film doing all sorts of doggy things like eating treats, laying on the bed, running upstairs and getting into mischief.

Buck has a very canine habit of chewing on things that are not really considered dog toys by humans. Only in the movie business does a dog get rewarded for chewing the roll-a-dex and the telephone. The phone was a special prop made of rubber that would not harm the dog. In another scene, Buck creates havoc when he pulls the tablecloth off the table. Whoops! The trainer cued the dog with verbal and hand commands to perform learned behaviors such as "pulling" and "taking" which in the context of the movie make it appear as though he was being a naughty dog. He was actually being a very good, very well trained actor.

When Eve attempts to give Buck a pill, she finds out the meaning of the word stubborn. She keeps shoving the pill into Buck's mouth and Buck keeps spitting it out. For this scene the pill was merely gelatin and sugar that was moistened to make it easier to roll out of Bucks mouth. The trainer had prepped the dog to keep dropping the pills and sit there like a very good boy.

Buck was portrayed by Pappy who appears to have no hang ups about being an actor.