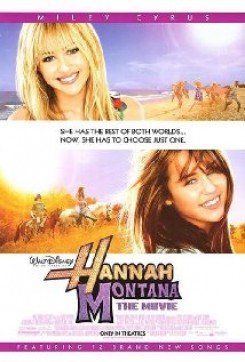 When Robby Ray (Billy Ray Cyrus) worries his daughter Miley is too consumed by her pop star alter ego, Hannah Montana, he forces her to spend two weeks at her grandma's farm with him. The experience teaches her and her father valuable lessons about identity, self-worth and the importance of community and family.

Before filming began, cast and crew members were instructed on the safety and handling of the animals. All grounds were thoroughly inspected for safety. Only necessary cast and crew members were allowed on the set. Whenever multiple animals were on the set at the same time, the animals were familiar with each other and were well-rehearsed to be together. For mild action, such as sitting, lying, walking or running, off-screen trainers used hand signals and verbal commands to achieve the action.

As Robby Ray (Billy Ray Cyrus) drives his truck up to Grandma's house, a hound dog sits in the cab between Miley and her brother. The truck comes to an abrupt stop. A bloodhound named Lincoln played the role of Robbie Ray's dog. The truck was on a special platform camera trailer. The dog was placed on the car seat by a trainer who hid inside the car, and another trainer standing outside the truck used a bait stick to get the dog to look in various directions.

In one brief scene, a man pours some water into a dog bowl and sets it on the ground. A dog walks up and drinks from it. The man grabs it and walnuts spill from it, rolling all over the street and past the dog, who is now lying down. A trainer cued the dog to stay while the actor was filling the bowl. Then the trainer verbally cued the dog to go to the bowl and drink, then to stop drinking and lie down. Crew members knocked over barrels of walnuts and air compressors helped move them along the ground. A nearby trainer used hand signals to get the dog to stay.

In one scene, Robbie trips over the dog by the china cabinet, causing decorative plates to tip off the cabinet and onto the floor. A trainer placed the dog on its mark on the floor and cued it to stay. The actor pretended to trip over the dog while the off-screen trainer called the dog. The dog began exiting the scene as a crew member bumped the cabinet, triggering the plates to fall.

The actors were all given riding lessons and instructions on the handling of the horses before filming began. All grounds were checked ahead of time for safety. Stunt doubles were used whenever possible. In one scene, Miley and Travis (Lucas Till) ride through a field on horses. The horses were accustomed to the helicopter that flew a safe distance above them.

As Miley sits on a suitcase by a fence, a horse inside the corral knocks her wig off her head with its mouth. A trainer placed the horse in the corral. The actress sat on her suitcase and a nearby trainer cued the horse to pull off the wig. The wig had a rope knot on it so the horse could easily pull it off with its mouth. Trainers instructed the actress on the handling of the horse beforehand and stood just off-camera during this scene.

After Miley mounts her horse Blue Jean and falls off, the horse runs off into the field. Travis, who is on horseback nearby, rides after the horse and ropes it, bringing it back to Miley. The actress mounted the horse as an off-screen trainer held it. A stuntperson doubling as the actress did the actual falling off the horse. The actor playing Travis was first filmed riding the horse and waving the rope, and then a stunt double was filmed doing the same action and roping the horse. The actor was then filmed riding the horse, holding it by the halter. As a precaution, a pick-up rider was in the field off-camera and other trainers stood nearby.

In one scene, Travis and Miley ride double alongside a pasture with cows grazing in it. Travis holds the lead rope of Blue Jean, who walks behind them carrying Miley's suitcases. The cows were hobbled in the pasture, which was surrounded by a fence. The actors mounted the horse and rode through the field as wranglers on foot and horseback stayed just off-camera. The actor was instructed on how to hold the rope and lead the horse. They rode a short distance and then dismounted with a trainer nearby. A trainer secured the empty, lightweight suitcases on Blue Jean.

Miley and Travis are seen by the barn, where some horses' heads protrude from stalls. Travis takes one of the horses out of its stall and throws Miley a saddle. The horses were placed in separate stalls after the trainers checked them out. One trainer hid in a stall with one of the horses, which was wearing a lead rope. The trainer held the rope and handed it to the actor.

For the scene in which Travis and Miley ride through a shallow stream, thewater was less than six inches deep and the stream bed was checked ahead of time to make sure it was safe to walk on. There were also several rehearsals with the actors so they were comfortable with the action.

A man has a ferret in his jacket pocket and it pops its head up while he is sitting at a dinner with several other people. The ferret jumps out of his pocket, runs across the table and onto the floor, runs out of the building through a revolving door and then scurries back inside to the dinner table and up the mayor's pant leg. This sequence was filmed in separate shots. One trainer placed the ferret in the actor's jacket pocket and an off-screen trainer used a piece of food to lure the ferret to pop its head in and out of the pocket. Then a trainer placed the ferret on the table and another trainer at the other end of the table verbally cued the animal to walk toward her, rewarding it with a treat. A trainer then placed the ferret on the ground and another trainer stood where the director wanted the animal to go and called to it. The ferret was very well-conditioned to the noise of actors yelling and running around, pretending to try to catch it. To get the ferret to run up the actor's pant leg, one trainer hiding under the table released the ferret while another trainer stood near the actor. A burlap tube was sewn into the actor's pants ahead of time to protect the actor and direct the ferret out. Then the ferret ran into the tube, which went up to the pocket of the jacket. In one shot, as the ferret is on the floor running around near the table, the waiter steps over it. This shot was carefully choreographed and filmed separately.

A man and an ostrich are at an exhibit, and the man speaks about the ostrich to some children. It appears as if the ostrich is pecking at him as he speaks. This scene took place at a real petting zoo. The ostrich was wearing a leash controlled by a trainer, and two other trainers stood just off-camera. The animal was placed inside a fenced area after a trainer checked it out. Treats were placed on the brim of the actor's hat to entice the ostrich to stay close. All animals in the zoo were in a secured area away from filming, but can sometimes be seen on-screen. The alligator was a mechanical fake animal.

As a man searches around the outside of an abandoned cabin, birds fly out the windows and startle him. Three trainers hid inside the cabin and released homing pigeons (trained to fly home from wherever they are) near the open window. The birds naturally flew out the window. When the head trainer arrived home that night, all three birds were waiting there for him.

As a plane arrives with Hannah, we see cows grazing in a pasture. The grounds were checked for safety and the cows' legs were hobbled to stakes in the ground, an action they were accustomed to. Crew members pushed the nonoperating plane onto the set and secured it to its mark.

As Travis is in the barn cleaning, Miley walks in to talk to him. There are chickens scattered all around the barn and one flies by them. Trainers placed chickens in coops and around the barn and scattered feed around to occupy them. An off-screen trainer gently tossed a chicken into the camera frame and onto the ground. Five trainers were on the set to herd the chickens afterwards. Later, as Miley sits in the loft playing her guitar, chickens are seen nearby. Trainers placed chickens around the barn after scattering feed around. One chicken with a leather band attached to its leg was placed near Miley, and a monofilament line attached to the leg band was run through the floor boards and held by a hidden trainer. Whenever the actors walked or danced around the chickens, they were very careful about where they stepped.

As Miley and Travis work on the chicken coop, goats and cows are seen in the background. Trainers placed these background animals on their marks right before filming began. The goats were wearing harnesses leashed to stakes in the ground. The cattle were placed in the field and a fence surrounded them. Five trainers stood just off-camera during filming.

Travis searches for Miley in the henhouse and comes across chickens sitting on bookshelves, a flower pot and a file cabinet, and on the floor. The bookshelves and file cabinet were modified with hay to become roosting nests so the birds would feel comfortable. Trainers placed the birds on their marks and then stood off-camera. All doorways were blocked with chicken crates and feed was scattered around.