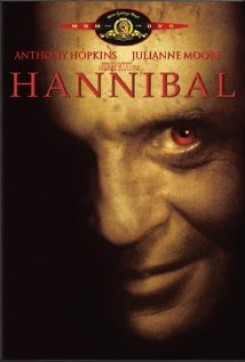 Hannibal, the long awaited sequel to the award-winning thriller, Silence of the Lambs, is coming to a theatre near you in February 2001. Sir Anthony Hopkins will be reprising his role as the arch cannibalistic killer, Hannibal Lecter, and Julianne Moore will play the tenacious agent, Clarice Starling, who is determined to capture him… again. However, Lecter is not the only actor in the film to devour his prey. A vengeful Southerner played by Gary Oldman is the proud owner of a pack of man-eating boars.

American Humane Association's Film and Television Unit was present during production to make sure that all the boars were safe and happy. AHA's field representatives observed pre-production training as well as on camera action.

Eighteen Russian Boars were selected from over 6,000 hogs in an international casting call. The lucky stars were chosen for their trainability and nasty countenance. They were imported to the set in Virginia from a farm in Manitoba, Canada. Each bovine actor weighed in at around 500 pounds apiece.

In the film, the boars appear to attack and devour several characters. Hannibal states in the first film that he prefers a cannibalistic piece of his victims such as "a nice liver served with fava beans and a good Chianti". The hogs are not so picky.

The hogs break into the barn pen to maul the bodies of their unfortunate victims. The doors of the barn were specially built to be very lightweight and loosely hung. The animals had been pre-trained to push through the doors and follow the buzzer sound into the barn pen where they were rewarded with food. The pen and barn area was checked, raked and cleared of any objects that would be damaging underfoot for the hogs. During the scene, a man in a wheelchair is pushed into the pen and the chair falls over. For this stunt, the hogs were kept away from the area where the chair falls to avoid any injury to the hogs.

In the pen, dummies and the stuntman were smeared with food so that the animals naturally mouthed the bodies. Popcorn jumps up and places his front feet on the stuntman's shoulders, appearing to knock him over. When it appears as though the boar is attacking the head and throat of the man, an animatronic boar's head was used. Puppeteers operated the arms and legs of the human dummies and the animatronic boar's head. The scene is an intricate composite of many takes and masterful work by the trainers, the boars, stuntmen, actors and the film editors.

How Do You Train a Wild Boar?

According to many studies, hogs are very intelligent creatures. They have a highly developed sense of smell as well as a keen sense of hearing. Wild Boars eat both plants and animals and are therefore classified as omnivores. The animal actors were mostly treated to apples, grapes and zoo food comprised mostly of horsemeat. The trainers from Gentle Jungle worked with the animals for over a month prior to filming to prepare them for their debut.

Lee, Wooly, and Popcorn were the leading porcine thespians. There were three other particularly ornery boars and 12 others who filled out the group. The three ornery characters were housed separately from the others. These three could be classified as the method actors in the group - asked to do nothing more than what they naturally were inclined to do.

Lee, Wooly, and Popcorn were reward pattern trained with food to learn to attack and chew on dummies and to jump onto a fence. They were able to not only jump but to prop their front legs up onto the top rail of the fence. Popcorn learned the particular trick of putting his feet up on a trainer's shoulders. All of the boars were buzzer trained to move from point A to B and rewarded with food on each successful take. This conditioning prepared them for the scene where the pigs break out of the barn and set upon the human actors.

Another scene in the film finds Hannibal scaring a dog by merely staring it down.

The canine actor was a highly trained seven year-old adult male German Shepard named Santos. When Hannibal encounters the dog it appears to back up, lay down, snarl and head for the door. Santos was trained in pre-production to do all of these behaviors and was well rewarded for his performance. This complicated series of behaviors took the skilled efforts of three trainers, Karl Lewis Miller, Sled Reynolds, and De Ann Zarkowski, who worked as a team to direct Santos.

There is a dove, its mate, a stuffed dove double and some pigeons eagerly eating in a park. When a dead dove is pocketed by one of the actors, rest assured it was a loose mount taxidermy bird supplied by a prop house. The live bird was trained in pre-production to circle around the fake double.

After Hamming it Up

When the film finally wrapped, four of the boars were taken to California to await their next film. These talented actors managed to continue their acting careers and will appear in the upcoming movie Crocodile Dundee in LA. The rest of the mini-herd was sent to Missouri and were adopted by a breeder where they will naturally live out their lives.