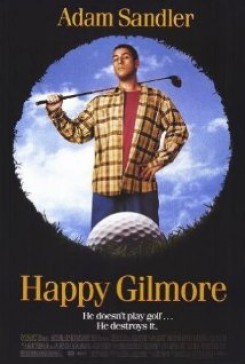 Happy Gilmore, filmed in Vancouver, is a comedy in which the hero has a passion for the game of hockey. After his father dies while playing hockey, his girlfriend leaves him and Gilmore goes to live with his grandmother. Although he has a passion for hockey, he doesn't succeed in the hockey team tryouts. At his last tryout, his bad temper explodes and he beats up the coach. He turns his sights toward golf and eventually proves to be successful both financially and in love.

Real and fake alligators were used in the film as well as a frog which is seen briefly sitting on a tree limb at a golf course. Two live alligators were transported from California to Vancouver, British Columbia. Three animal trainers were always present while filming the live action with the alligator. One of the alligators named McNasty, was chosen because she has a particularly wild temperament. The alligators were transported by air cargo in wooded boxes in which airholes were drilled and which were lined with foam padding. The animals, who had their mouths taped to prevent them from harming people and themselves, were accompanied by their trainers. While in Vancouver, a van was used as ground transportation for the wooden boxes containing the alligators To get the alligator out of the van or truck, a waist-tie plastic cable was always used. The three trainers then carried the wooden box, which had wheels, onto the grassy golf course and untaped the allegator's mouth. She quickly snapped and went in the opposite direction toward the pond. She was filmed landing in the pond but, from this point on, a mechanical alligator was used for filming. The second alligator was never used. It is the mechanical alligator that Gilmore appears to struggle with in the pond in an effort to retrieve his golf ball. This production was filmed in Vancouver, British Columbia by a Canadian company. American Humane was not on set.