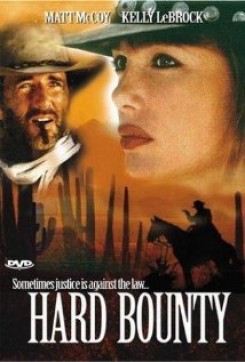 Hard Bounty is a Western that takes place in the late 1800's, set in Notrees and Silver Flats, Texas. Martin Kanning, a former bounty hunter, retires and buys the local saloon. An ex-partner and enemy of Kanning's kills Rachel, one of the saloon girls, in order to draw Kanning out in the open so they can settle an old score. Because the citizens of the town will not help her, Donnie, Rachel's older sister, and two other saloon girls go after the killers. Kanning, who is Donnie's fiancee, shadows the girls, instructing them and honing their instincts, stepping in to help only when necessary. After capturing a wanted outlaw, Kanning mounts his horse, ties a rope to the saddle, and pulls the outlaw, who is walking, by the rope back to town. Later, Martin mounts to go after another outlaw with a bounty on his head. Martin comes up behind the young man, Bradley Hope. who is packing his belongings onto his horse. He draws his gun, and Martin is forced to kill him. At the same time, however, he accidentally kills a woman. Martin later learns that that the only thing that Bradley Hope was guilty of was running away with a man's daughter. Martin buries them both and swears never to go after another bounty again. It is then that he hangs up his guns and buys the saloon.

There are a couple of scenes in the film where there is gunfire between riders on horseback. To protect the animals, quarter loads were used in the guns and cotton was put in the horses' ears. Horses are also seen being ridden throughout the film and as background. Also, dogs are seen periodically walking, running and in the background.