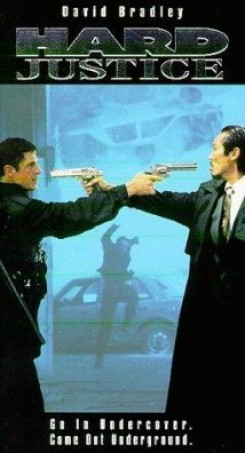 Hard Justice is a violent film about corruption in the Federal Bureau of Alcohol, Tobacco and Firearms. Manny was one of the ATF's top detectives who was killed while he was working undercover in prison. Nick Adams was Manny's partner and best friend. Against orders, Nick, with the help of Detective Dickerson, infiltrates the prison as a convict guilty of manslaughter. He meets one of the biggest dudes in prison by the name of Mr. Clean. The two of them get into a brawl and end up friends. After poking around for information with the help of Mr. Clean, Nick discovers that not only is Warden Pike involved in gun running, but also Nick's co-worker, Dickerson. Jimmy Wong, a hardened criminal whom Nick put away, comes back after being hospitalized with wounds from Nick on their last encounter. As it turns out, Jimmy is one of Warden Pike's boys who is very involved in the gun smuggling and murder. We learn later on, however, that Dickerson was actually the one who murdered Nick's buddy Manny.

While undercover, Manny learns that Dickerson is involved and hides in the prison basement where Dickerson and Pike are in a meeting. It appears that one of the rats bites Manny's hand. Later when Nick infiltrates the prison, a rat appears to bite him also. To accomplish theses scenes, the trainer placed the rat on a shelf next to the actor's hand. In both scenes, the actor merely raised his hand to react as if the rat had bitten him.