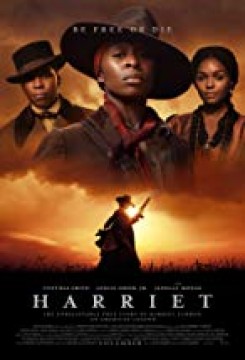 The incredible true story of Harriet Tubman. The slave who escaped and started a revolution.

When we see quick shots of a horse escaping from its carriage and run through a field, the horse was led to the set with halter and acclimated to the A-B route which started with the horse standing in the shaft of a wagon in front of a barn, then continuing down a small decline and onto a field that had been groomed. When ready to film, wranglers fitted the horse with a collar harness. The harness straps were not buckled and were wrapped in the harness to ensure that the harness would fall off the horse as it moved forward out of the shafts. When ready, the horse was positioned in the shafts of the wagon and held at the head via halter and lead rope by wrangler. When ready, wrangler unclipped the lead rope and moved off camera. Then another wrangler yelled "Ya" and hit the bed of the wagon which cued the horse to move forward. As the horse moved forward, the harness was pulled off and the horse ran A-B a distance of 150 yards to the horse trailer.

In the scene where the actress is asleep in the forest and a bunch of men on horseback and with a team of dogs search for her, production filmed this action in numerous set ups capturing a portion of the action in each setup. Snake and the mantis were filmed separately as an insert shot. Wranglers doubled for the actors. Dogs and horses prepped together prior to filming and were comfortable working together. On action, the riders and dog handlers walked across the field towards camera.