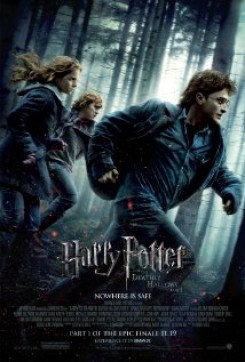 With a ransom on his head, Harry and his friends go on the run from Voldemort and his "Death Eaters." The teens set out to find the horcruxes and learn about the mysterious Deathly Hallows, while Voldemort's minions head on a search to steal a special wand and kill Harry.

The birds in this film (a white peacock, an owl and a black bird) were extensively rehearsed for their actions, which were mild. The indoor sets were secured and lined with netting. On the outdoor sets, the birds were secured with lightweight monofilament lines on their legs or jess straps attached to safety lines held by off-screen trainers. When Harry (Daniel Radcliffe) holds Hedwig's (the owl) cage or has Hedwig on his shoulder, the actor was accustomed to this action and trainers stood nearby. The scene in which Hedwig flies toward characters flying on brooms and motor-scooters, and a villain causes the owl to spiral off the screen was done with computer-generated imagery (CGI).

For the shot of a Doberman barking at the end of a chain, trainers used hand signals and verbal commands to cue the mild action, which the trained dog was accustomed to performing.

The giant snake seen with the Death Eaters, the thousands of spiders that attack Ron (Rupert Grint), the cat and the deer were CGI.