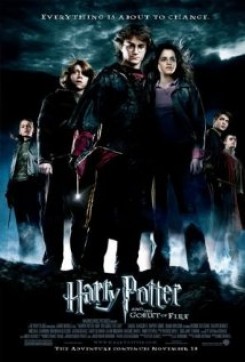 Harry Potter And The Goblet of Fire

During Harry Potter's (Daniel Radcliffe) fourth year at Hogwarts, he finds himself forced to compete in the Triwizard Tournament, one of the wizarding community's most revered traditions. Three champions – one from each of the largest European wizarding schools – are selected by the enchanted Goblet of Fire to compete for the glory of winning the coveted Triwizard Cup. Meanwhile, the increased presence of Lord Voldemort loyalists known as the Death Eaters spells disaster because it can only mean one thing—the Dark Lord is ready to rise again.

Hermione's (Emma Watson) cat Crookshanks rides beside her during the train trip to Hogwarts. Harry's owl Hedwig perches on a bench directly opposite them.

Four trainers were on hand to attend to the two animals used in this scene. Trainers placed the cat in a sit-stay-watch position on the bench between Hermione and Ron (Rupert Grint). The trainer then had Hedwig the owl roost on the bench with a security restraint called a "jess" tied to the armrest. According to the Certified Animal Safety Representative on the set, there was no problem working with both animals in the same shot, as they were not at all interested in each other.

Professor "Mad Eye" Moody's (Brendan Gleeson) classroom contains several specimen jars filled with bees, flies, worms, and other creepy crawlies. Each insect type was housed separately. The bees arrived on the set in a special box, and a handler tapped several of these "apian actors" into an upturned bell jar. Holes had been drilled in the base of the jar for ventilation, and the trainer requested an air conditioner on the set that had a hose attached in order to inject cool air for the bees as needed.

Meal worms were shown in an open bell jar on a wood block, and the bell jar containing flies also had air holes in the bottom. All bugs were removed from their jars during long breaks. These insects provided background interest for the fake scorpion and other magical bugs that take center stage in this scene. The trainer and his assistant kept a constant vigil over the insects during preparation and filming, and only the designated handlers were allowed to move or adjust the bugs. All jars were taped to the tabletop for stability.

In one scene, Moody turns Malfoy (Tom Felton) into a white ferret. After making the animal writhe in the air for a moment, it falls down into the pants of the startled Goyle (Josh Herdman), crawls out the hem, and disappears. This action sequence was filmed in cuts, and a fake stuffed ferret was used for the shot of the animal twisting in the air. With the live ferret standing on a mark on the ground, the trainer twirled a bait stick above it to make the animal go in circles, stop and sit up. The trainer then picked up the ferret and placed it in the enlarged waistband of Goyle's pants. The ferret looked over the waistband, turned around, slid down a special tunnel sewn in the pant leg, and escaped out the bottom to another waiting handler.

During Harry's encounter with Voldemort in the cemetery, a crow flies from tombstone to tombstone. The trainer stood off camera with a crow named "Oreo" and used hand signals to cue the bird to fly to a gravestone mark, stay, and fly again. Food bits were given as a reward upon completing of the action.

Creating the Hogwarts Owlery, home of the school's messenger owls, required a hefty dose of movie magic. A smaller-scale set housing a mixture of real, plastic, and taxidermy birds was digitally replicated to create the illusion on screen of a giant room filled with the magical messengers. When filming, all real owls wore security jesses attached to safety latches behind the perches.

For footage in flight, owls flew either in front of a blue screen or a small segment of the set. One trainer would send the bird off; the second handler would call and catch the owl, offering food in a pan as a reward. To accomplish the mail delivery action, trainers would give the bird a letter and it would fly to an end mark perch, where it then dropped the letter and received a food reward. The letters were actually small, folded papers which had a leather loop for the bird to hold in its beak.

American Humane's experienced Certified Animal Safety Representative monitoring the production closely watched the heat from the lighting, airflow, and noise level on the set, and was ready to change out the birds on perches if they showed any sign of stress, such as having gaping mouths or panting. These owls were slowly exposed to film activity, which was increased over a period of a few weeks to make the introduction smooth and stress-free.