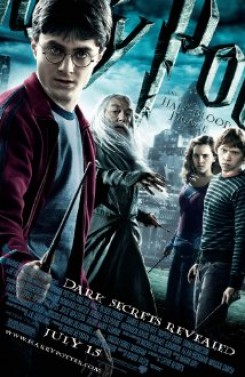 Harry Potter And The Half Blood Prince

During Harry's (Daniel Radcliffe) sixth year at Hogwarts, he discovers a potions book that used to belong to the "Half-Blood Prince." He and his loyal friends, Hermione (Emma Watson) and Ron (Rupert Grint), embark on an adventure to unravel the mystery of the Half-Blood Prince and the wickedness of Lord Voldemort's (Ralph Fiennes) past.

Before any animal was filmed, the grounds were thoroughly inspected for safety. Actors and crew members were introduced to the animals and were instructed on their proper handling before filming. Sets were secured and all possible exits were blocked off. Only limited cast and crew members were allowed on set.

In Hagrid's (Robbie Coltrane) hut, Fang the dog lies on the floor near the fireplace with his head down. He lifts his head, looks up at Harry (Daniel Radcliffe) and then puts his head back down. The trainer walked the dog on a leash to his mark on the floor, removed the leash, and stood just off-camera to cue the dog to lie down, stay and "look." The dog then put its head down again while the actors delivered their lines. The dog was kept at a safe distance from the fire, and he loved the warmth of it so much that at one point, he rolled over to warm his belly and fell asleep. Later, Fang stands nearby as Hagrid pushes a giant spider into a grave. The trainer handed the dog to the actor moments before filming and stood nearby for this brief action.

A man walks two dogs on leashes through an alley. Then a dog sits next to a man at a train platform while a train arrives. For these scenes, trainers handed the well-rehearsed actors the leashed dogs right before filming and stood nearby for this mild action. On the train platform, the trainer stood nearby and placed the well-trained dog in a "sit-stay" position as a prop train approached. The prop train was a custom-made train car on a short track that only spanned the length of the camera frame (enough to appear to be pulling into the station). It did not move very fast and did not make noise like a real train, so as not to startle the animals. Moments later, a bird in a cage and a cat are seen on top of some luggage. For this shot, the trainer placed the cage and the cat on the luggage, which was secured from tipping, and then cued the cat to stay for this brief scene.

The birds in this film were extensively rehearsed for weeks. Most of their actions were mild. The indoor sets were secured and lined with netting and on the outdoor sets, the birds had lightweight monofilament lines attached to their legs and held by an off-screen trainer. When not being filmed, the birds were housed in a large cage with a large perch or transported to set in a smaller cage.

Birds are seen briefly inside two cages, one cage inside the other. The trainer held each bird in his hand, moving it into the innermost cage. The trainer then gently released each bird onto its perch, where a cup of seeds had been placed for the bird. A special training tool called a perch stick was occasionally used to guide the birds into position.

Later, Malfoy (Tom Felton) takes a bird out of its cage, strokes it and sets it on the shelf of a magic cabinet, where it walks away. He then opens the cabinet door to reveal the bird dead on its side. This scene was filmed in separate shots. First, the bird was filmed in its cage, which it was accustomed to. The trainer then placed the bird into the well-rehearsed actor's hand (the bird had been also been well-prepared) and instructed him to slowly raise his hand, gently stroke the bird and place it in the cabinet. The bird was filmed close up, so the nets and trainers surrounding the well-trained bird would not show up on screen. The dead bird was a special effect created with computer-generated imagery and the feathers on Malfoy's hand were prop feathers that did not come from the bird in the scene. Moments later, a bird flies up and out of the cabinet and lands on a pillar. The bird had a jess on its leg with a monofilament line attached to it so that it could not fly away. Trainers released the well-rehearsed bird, which had been trained to fly to a certain point, and retrieved it immediately after.

When the kids and Dumbledore (Michael Gambon) talk at the top of a staircase near a belfry, a bird flies across the sky. For this brief action, five trainers stood nearby as the well-rehearsed bird, which was equipped with a monofilament line, was released and retrieved immediately after.

The birds flying around an actress' head and smacking into a cement post, disintegrating on impact, were computer-generated, as was the large bird flying in the sky at the end of the film.

For scenes in which Crookshanks the cat is seen in the background, such as in the Gryffindor common room, the trainer carried a cat named Cracker Jack in a crate and set him on his mark, giving him hand signals and verbal commands to sit, stay, watch or perform other mild actions. The cat was praised and rewarded with treats after takes and returned to his crate to be removed from the set.

A fox is in a cage inside Professor McGonagall's (Maggie Smith) office. Trainers placed the red fox in the cage and allowed it to do whatever came naturally during this brief scene. The fox was accustomed to being in this secure cage, which had a comfortable floor.

The moths seen inside a glass cage in a dark room were computer-generated. The giant spider was obviously fake, as was the golden owl that spread its wings at the podium. Production provided documentation that the antler mounts on the wall were props.