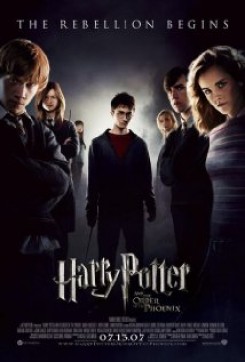 Harry Potter And The Order of The Phoenix

In this fifth installment of the Harry Potter series, Harry (Daniel Radcliffe) deals with the grief of losing a friend and the threat of his enemy, Lord Voldemort (Ralph Fiennes), returning. Harry must convince his classmates that evil is near and train them to fight before it is too late.

In several scenes, owls and other animals are seen sitting in cages or being carried in cages. The owls used for these scenes were very well-trained and very comfortable with their scripted actions. All scenes involving the owls were on closed, air-conditioned sets, which were limited to only necessary cast, crew and the American Humane Certified Animal Safety Representative. Multiple trainers were also on hand for all actions. For any scenes where the birds were in flight, a jess (safety line) was used and the short flights were limited to three takes. The birds were rested regularly in between takes. Flight action was performed in front of a blue screen and later edited in post-production. Owls were rewarded with treats for the actions. The cages with animals held a combination of live and stuffed animals. The actors carrying the live animals in cages were instructed on proper animal handling. Trainers transferred the animals into the prop cages and handed them to the actors right before filming began. The animals were retrieved at the end of each take.

An owl flies through a window, bumps into the ceiling and lands on the ground. The owl immediately hops onto the couch from the ground, drops off a letter and flies back out through the window. This scene was well-rehearsed prior to shooting and filmed in separate shots. The flight action was filmed in front of a blue screen. The owl was released by the trainer and called to a perch by another trainer. A small envelope was placed in the owl's beak. Computer Generated Imaging (CGI) and a stuffed owl was used to create the bumpy landing. For the rest of the scene, a trainer hid behind the couch with the owl perched on his hand. On "action," the owl hopped onto the couch, secured by a jess. A second trainer used verbal cues to encourage the owl to fly back out the doorway. The owl was rewarded with treats at its landing on the second trainer's hand.

Crookshanks the cat walks down some stairs to play with a hanging "ear" that Harry and his friends are using to eavesdrop. The cat plays with the ear, then grabs it and runs back up the stairs. All actions involving the cat were on a closed set with limited noise, and access to the set was allowed only to necessary cast, crew and the American Humane safety representative. The cat was released by a trainer at the top of the stairs and verbally cued to "play" with the rubber ear. The cat was then verbally cued by a trainer at the bottom of the stairs to carry the ear off camera, and was rewarded with a treat after safely delivering his unique toy to the trainer. The cat was trained for several weeks prior to filming and was comfortable with the action.

Crookshanks sits in a doorway, and later on a stool as Harry and his friends have dinner. The cat was placed on its mark by a trainer and given the verbal command of "sit and stay." Sardine juice was rubbed on the cat's mouth to encourage it to lick its lips. The cat was also placed on its mark on top of the prop stool and given the verbal cues "sit," "stay" and "watch." A feather was used to direct the cat on which way to look. The cat was rewarded with treats once the actions were completed.

A dog walks through a train station, past Harry, down some stairs and through a door. This scene was filmed in separate shots. The dog was placed on its mark by one trainer and verbally cued to "come" to a trainer located at the base of the stairs. The dog was placed on another mark and then it exited through the door. Special effects were added in post-production for a transformation that the dog makes behind the closed door.

Filch (David Bradley), the school caretaker, stands in the dining hall doorway and his cat, Mrs. Norris, jumps on his shoulders. In other scenes the cat also follows him, sits next to him at meals and watches him from the base of a ladder. The cat used was trained and very well-rehearsed for the actions required. The cat was put on its mark by the trainer and verbally cued to follow the actor and jump on the actor's shoulders. The number of takes was limited to ensure the cat's comfort. For a scene where the actor hangs decrees on a wall, the cat was verbally cued to "go to" the mark and was kept a safe distance from the short step stool the actor used. For other scenes, the cat was placed on its mark and given verbal commands to achieve the simple necessary actions of following and watching the actor. The cat was rewarded with treats for the actions.

Several plates hanging on an office wall show moving pictures of cats playing. One kitten later "exits" its hanging picture. All the kittens were deemed as healthy upon arrival by the safety rep. The kittens were given several toys to encourage play behavior and filmed in these natural actions. All kitten contact areas were disinfected to ensure the kittens' safety, and noise in the area was limited. Access to the set and direct contact with the kittens was limited to only necessary crew and the safety rep. Disinfecting foot baths and hand sprays were used by all crew members on the set. Some of the kittens wore simple, comfortable costume pieces. To achieve the action in which the kitten exits its picture, a bait stick was used to encourage the kitten to move off camera. The kittens were rewarded with treats and hugs for their playful actions. All actions were performed in front of a blue screen and later edited in post-production.

At the Boar's Head Pub, rats run across the shelves, a goat walks from behind the bar and a boar's head on the wall comes to life. Later, a rat runs through a broom closet. Cages were placed on both ends of the shelves for the necessary rat actions. The rats were released from one cage and called to an opposing cage where tasty treats were waiting for them. The rats were trained and comfortable with these actions before filming began. As for the goat, a trainer hid behind the bar holding the goat and released it on cue. A second trainer verbally cued the goat, and used another goat and treats to encourage it to come to him. The goat was trained for this action for several weeks prior to filming. Noise on the set was limited so that the goat would be comfortable and not become startled. The moving boar's head on the wall was created with special effects.

Hagrid (Robbie Coltrane) tosses a steak to his dog, Fang, as Harry and friends watch from a nearby table. The trainer placed the dog on its mark in a "lay" position. The dog was verbally cued to watch the actor with the steak and then catch and eat the steak when it was tossed. A fresh, trimmed steak was used and the dog was happy to complete the action as many times as needed. Only necessary cast, crew and the safety rep were allowed on the closed, quiet set.