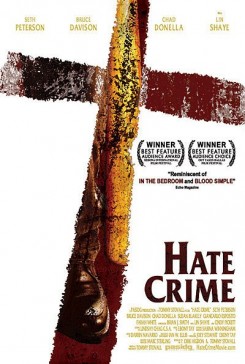 This provocative film explores themes of intolerance and revenge as it traces the story of a middle-class, church-going gay couple menaced by a homophobic new neighbor. When a hate crime is committed against Trey (Brian J. Smith), his partner Robbie (Seth Peterson) and Trey's parents are devastated by the act—and their seemingly futile search for justice. That is, until Robbie exacts a retribution that falls outside the realm of the authorities.

Robbie and Trey's dog Phoebe was played by a mixed breed named Heidi and was introduced to the actors and crew long before filming began. The actors endeared themselves to Heidi by carrying treats in their pockets to reward the dog after each take. To get her to perform mild companion-type activities that occur throughout the film, the trainer put Heidi on mark and stood off camera using a combination of verbal cues and hand signals to achieve each action.

An opening sequence shows Phoebe running down the sidewalk alone with her leash dragging behind her. Later, that shot is repeated following playful interaction between Trey and the dog in the park. When they're ready to leave, Trey puts her leash back on and they begin to walk away. Phoebe is next seen running down the sidewalk and onto the front porch of their home. The dog barks to get Robby to open the door, and when the actor bends to pet Phoebe, he gets blood on his hand.

This scene was filmed in separate cuts edited together in post production. As the actor sat on the bench, a trainer placed the dog on mark and the co-stars played together without any prompting from the animal handler. To get the dog to run through the park, down the sidewalk, and up to the house, one trainer released the dog and a second handler stood off camera at the end mark enticing Heidi with a favorite treat. The fake blood on her coat was non-toxic makeup.

In one scene, a neighbor walking his dog waves to Robbie as he jogs past. In a scene at Trey's veterinary practice, the doctor gives an injection to a small dog cradled in its owner's arms. Trainers handed each of the dogs to the actors right before filming began and then rewarded the pets with treats. The injection was simulated.