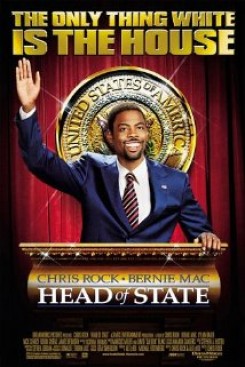 Mays Gilliam (Chris Rock) is an alderman, picked by the Democratic Party to run for the office of President of the United States. Mays pick his best friend who is incidentally his brother to be his running mate. We follow these two unlikely candidates down the campaign trail and right on to the election highway.

As the campaign bus takes to the open road to win votes in various states, it passes some animals along the way. Cows are grazing in a pasture and later a few chickens are seen walking by the side of the road as the bus passes. Both of these scenes were filmed on a farm in Maryland. The cows were filmed naturally in their pasture. There is a brief scene later in the film where May's ex-girlfriend screams and the camera cuts to a cow looking at the camera. The farmer stood off camera and held up some food to get one of the cows in the pasture to look in various directions. This was inserted into the film in post-production. The chickens were brought to the farm by two trainers. They were placed on their marks and food was scattered along the ground to keep them on their marks. The country road was closed to any traffic except for the bus, which drove slowly on the other side of the road. The chickens were retrieved after the shot by the trainers.

One of Mays' political crusades is to save a home, owned by a Miss Pearl, from demolition. Miss Pearl's cat is sitting inside the house as Mays enters. We see the cat through the window as they run by. Miss Pearl picks the cat up and holds it in her arms as Mays tries to convince her to leave before the eager demolition crew begins the destruction. As Miss Pearl and Mays, who now has the cat in his arms, run out of the building, the house explodes in the background. A trainer hid inside the building beneath the windowsill and verbally cued the cat to jump up on the sill. The trainer handed the cat to the actress who continuously petted it during this part of the scene. The actor held a fake cat while exiting the building right before the explosion.

On television we see a campaign ad for Mays. A young boy is playing ball with two dogs. He throws the tennis ball up and one of the dogs catches it in his mouth. A cameraman filmed the boy playing naturally with his two favorite pals. The two dogs live with the young boy and his family.