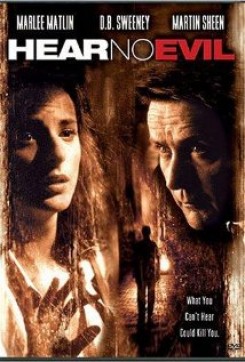 Jillian is a deaf athlete who works as a personal trainer. She becomes involved in a murder case when a friend hides a priceless rare coin in her apartment. The friend, Mick, is a reporter who is working on the murder story for his paper. He's contacted by a young tough after Mick publishes a story critical of police Lieutenant Brock. The kid tells Mick that Brock ordered him to rob a rare coin from a museum and threatened to report him to his parole officer if he didn't. In the process of stealing the coin a security guard was shot and killed. The kid also gives Mick the low down on Brock who, apart from being corrupt, is a violent and paranoid sadist with a taste for the finer things in life such as classical music and rare coins. He gives the coin to Mick but just as Mick is about to be taken into custody for questioning by Brock, he quickly hides the coin in Jillian's telephone pager. After Mick is released from a brutal interrogation, his car explodes and he is killed. Brock next focuses his attentions on Jillian since Mick was in her apartment just before he was taken into custody. Brock questions her and threatens her to give him his coin. Since she doesn't know she has the coin, she, of course, refuses. Brock has determined that she must have it, whether she knows it or not, and begins his terrifying harassment of her.

In an opening sequence a man on horseback slowly approaches the entrance of the museum, dismounts and walks over to the security guard and shoots her. This scene was shot in cuts and the horse was not present during the gunfire. Jillian keeps goldfish in an aquarium in her apartment. When she returns she discovers that Brock has had the apartment searched and ransacked and her goldfish are dead at the bottom of the fish tank which has no water in it. Goldfish that had died of natural causes were obtained from a pet shop for use in this scene. In addition to the above action, several scenes involving dogs were filmed. These scenes were monitored by American Humane and, on location, by the Oregon Humane Society. All of the dog action was edited out of the film.