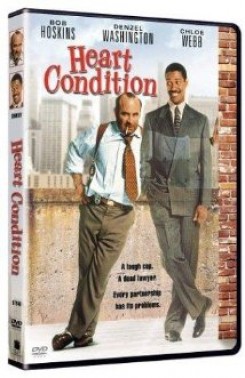 Heart and Souls is the delightful story of Thomas Reilly and the role he plays in releasing four souls from being earth-bound after they're killed in a bus accident.

Eva and Frank Reilly are on their way to the hospital, as Eva is just about to deliver their first child. A city bus, traveling in the opposite direction, collides with the Reilly's car, causing the bus to run off a bridge to a street below, killing all aboard. The four passengers were Milo, a small-time thief, Penny, a single working mother, Harrison, a singer who never made it, and Annie, a young woman who was on her way to agree to marry her beau.

Just as Eva gives birth to her son, Thomas, the spirits of this unlikely quartet is swooped into the car with the new family. As Thomas grows up, these four are with him constantly, with only Thomas able to see them. We soon realize that these people are stuck at Thomas' side forever, or at least until he is grown and can help them fulfill the last thing that each should have done to make their life complete before their untimely demise. We watch as each of these people receive what they need and how it changes Thomas' life.

In one scene as Thomas is trying to retrieve some stamps for Milo, he breaks into the house, only to discover a large Bull Mastiff who growls at him and chases him from the room. The dog followed hand and verbal commands to "smile" and "chase" from his trainer, who was out of camera range.

In another scene three cats are seen running into a woman's yard. The cats followed the sounds of a clicker used by their trainer with food as a reward.