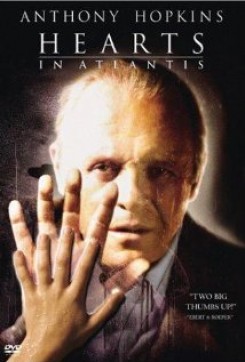 Based on the Stephen King novel by the same name, Hearts in Atlantis features newcomer Anton Yelchin as Bobby, an 11-year-old boy who befriends Ted (Anthony Hopkins), an enigmatic man who has just moved into the building where Bobby lives with his mom. Ted and Bobby develop a unique relationship, leaving Bobby's mother (Hope Davis) both confused and concerned.

A Fishy Task At the county fair, Bobby opts to play "Big-Hearted Bill's Goldfish Stand" toss game. The game consists of tossing a ping-pong ball into a fishbowl in order to win the fish inside. Aiming for the aquatic prize, Bobby gets one in and wins the fish. A trainer filled all of the bowls with water and made sure the water was a comfortable temperature for each fish. The trainer then placed a goldfish in each bowl. None of the fish sustained any ping-pong ball injuries. Later, the goldfish is in a bowl in Bobby's room. The trainer merely placed the bowl on its mark and let the handsome fish flex its acting gills. Canine Cameos In one scene, a dog runs to a car from off-screen as Bobby whistles for it to come. A trainer released the dog from off-camera and verbally cued it to run into the car, where another trainer was waiting. Later, the paperboy delivers his papers while a dog runs in the background. The trainer re leased the dog, which ran to another trainer waiting off-camera with a treat. A dog also makes a cameo at the Corner Pocket Saloon. The mild action includes the dog standing up in a booth where several men are seated. The trainer placed the dog on its mark and stood off-camera to supervise the action. All of the dogs were rewarded with edible treats after their scenes were filmed. Freedom Flight A flock of homing pigeons takes flight following an intense scene. The trainer released the banded birds-which means that they wore identifying tags in case they were lost or injured on their journey home-and they all flew back to their compound.