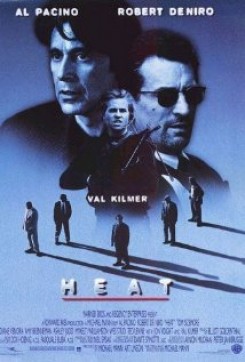 Heat is a suspense crime drama about a group of armed robbers lead by Neil McCauley, a dedicated, hardened, criminal who stages a string of profitable robberies. McCauley is committed to pulling off one of the biggest heists of his career and retiring to New Zealand. His philosophy of life is that there should be nothing in it that he can not walk away from in thirty seconds. Vincent Hanna is a robbery/homicide detective committed to tracking down McCauley and his band of robbers and bringing them to justice. McCauley and his crew rob an armored truck, killing three guards. That is when Hanna is called in and starts his investigation. At first it is nearly impossible to find out anything about these criminals as they leave few clues. But Hanna calls in all his favors from informants to help compile a composite of the men. Before long, he knows intimate details of each man's life, their wives, their wives lovers, accomplishments, failures, etc. In Hanna's pursuit of McCauley, he comes to the realization that they have many things in common as they are both equally determined to finish the tasks they have set for themselves. McCauley makes a fatal mistake which in the end will cost him his life. He meets Eady, a bookstore clerk, falls in love with her, and asks her to go to New Zealand with him. Then at the site of their big heist, a bank in downtown Los Angeles, Hanna and his men are waiting outside as McCauley and his crew exit. A chase ensues through the city, first by vehicle, then on foot as the robbers desperately try to loose the police. McCauley and some of his men get away, but now he must make the hardest decision of his life, to either live by his long standing philosophy or take the chance of getting caught going to get Eady. McCauley's new found love wins, giving Hanna just enough time to find him. In the end, it comes down to a confrontation between Hanna and McCauley which results in a shoot out between the two equally determined men.

When Hannah goes to see one of his informants, the man takes off running with Hannah in pursuit. During the chase, they run through a junkyard where dogs are seen in runs in the background.