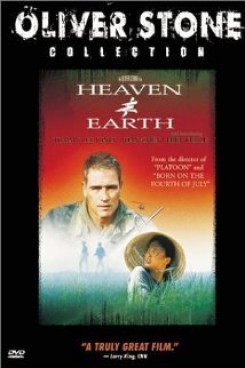 Heaven and Earth is a very moving story in which a young Viet Namese girl, Lai Le, learns the meaning of love, hate, devotion, betrayal, and finally, respect and love. Lai Le, the youngest of six children, learns the hard lesson of life when her country, Viet Nam, is constantly under attack and she loses he youngest brother to the fighting efforts. Her life continues to be a series of hardships for her and her family, until Lai Le finally meets the love of her life, or so she thinks, Steve, an American soldier. They are married and Lai Le gives birth to two sons. When Steve's tour of duty is completed, they leave Viet Nam and move to San Diego. Lai Le will soon realize that money can not buy everything, and that her destiny is to always be in between two worlds; happiness and sorrow, America and Viet Nam, ... Heaven and Earth. Most animal action is mild in this film. Numerous scenes contain animals such as oxen, wild dogs, native birds and pigs seen filmed in their natural habitat in Viet Nam as atmosphere and/or background. In one scene Lai Le has been taken prisoner by the Viet Kong. She, along with two other girls, are tied to a post where their legs are brushed with honey. In a matter of a few moments ants are seen covering the ground and the girls' legs, attacking the honey. .........................................After this, one of the soldiers comes over to the girls and places a snake down the front of each one of their shirts, causing the women to cry and scream. ................................................ When Lai Le comes to America with Steve and the boys, they stay with Steve's mother. She has five little dogs as pets, which are present in three scenes as atmosphere, either sleeping, sitting or eating.

As this production was filmed, for the most part, in Viet Nam, American Humane was not on the set.