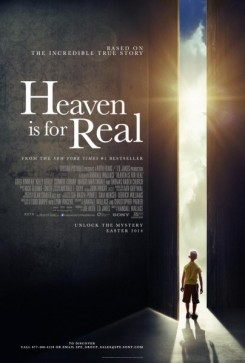 Heaven Is For Real

Based on the best-selling book, a small town preacher must find the courage to share his son’s discovery with the world.

Throughout the film, the family has a dog seen performing such mild action as sitting on a porch, barking, being petted, and walking off leash. For all of these scenes, trainers used hand signals and verbal commands to cue the mild action, which the trained dog was accustomed to performing.

In the scene with the butterflies in the greenhouse the trainer released the monarchs in the butterfly pavilion at the zoo, where they will remain after filming. They are indigenous to the area.

In the scene where the little boy holds a tarantula, trainers used a tarantula in the scene which is accustomed to being held by strangers since it is used in educational programs at the zoo. They actually filmed this tarantula at the zoo where it lives and was placed back in his home after filming.

The birds in the sky were all done through CGI.