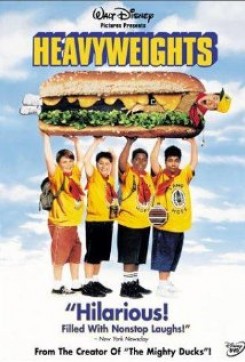 Heavyweights is a comedy about the trials and triumphs of a group of teenagers who are sent to a camp for fat kids. Jerry's parents want him to go to Camp Hope for the summer, much to Jerry's protestations. However, once he is there he befriends a group of boys who have similar problems with weight and self esteem. At first the camp doesn't seem so bad, considering the boys have a stash of candy and food stuffs to get them through the summer. But when the camp's benevolent owners are forced to sell out to a health and fitness fanatic, things change. The boys become subjected to weigh-ins, poor tasting health food, exercise, the confiscation of their own food and the wrath of a fanatic, Tony Perkis. Tony has plans to become the next fitness guru and use the summer to shoot a video that will promote his program as "the" weight loss infomercial. His new staff, Team Perkis, is equally oppressive. The boys at Camp Hope are made to compete with their historic rival, Camp MVP, to whom they lose every year. Jerry and his friends write home in desperation, but soon discover that Tony has confiscated their letters as well as their food. The boys find a black market food source and weigh in heavier at mid-summer which infuriates Tony. In anger, Tony subjects them to a grueling twenty mile hike. On the hike, they trap Tony and put him in a cage and eventually capture the other Team Perkis counselors as well. They hold a party and gorge themselves before they realize that the best revenge is to gain self respect. On visitors day, their allies, counselors who are not part of Tony's crew, show the parents all the video out-takes that portray Tony in his true light. In the end, they even manage to defeat Camp MVP in the Apache Relays, winning both self respect and the acceptance of their parents.

Animal action is minimal in this film. In one scene the boys are so desperate for food that they even resort to chasing some cows around a field. They are waving baseball bats, but there is never any contact made with the animals and the boys are a good distance from the cows. The animals do not appear to be disturbed by this chase. In fact, the joke is that the chubby boys haven't a chance of catching the cows who are just lumbering along.