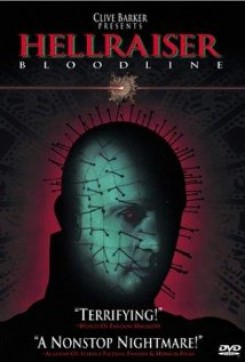 HellraiserIV: Bloodline is the fourth episode in the Hellraiser series. It is the story of evil and mayhem released from a toy box made by a gifted toymaker in the 18th Century. The story begins on a space station. Paul Lemarchand, who built the station, is caught trying to destroy it. Through a series of flashbacks, Paul tells the woman who catches and interrogates him, a story of violence, death and torture, which dates all the way back to the 18th century, up to the year of the story, 2127. Paul's ancestor, Phillip Lemarchand, was a gifted toymaker in the 18th Century. He made a toy box for a Duke that opened the doors of hell. Deadly and ghoulish spirits were unleashed from the box when Phillip delivered the box to the Duke De L'lisle. As a result, Phillip lost his life. His wife and children escaped from the Duke and his demons to France and then on to America where the Lemarchand bloodline continued. Flashbacks in the film continue to the year 1996 in New York. John Merchant, (a/k/a. Lemarchand), an architect specializing in light, is shown having vivid, violent nightmares. The nightmares progress into a series of horrors with the Duke De L'lisle as torturer, along with his two evil companions and an assortment of ghouls. One final nightmare becomes very real as the 300 year-old Duke kidnaps John Merchant's young son in an effort to blackmail John into making more boxes, thereby giving him more evil games to play in his quest for more and more suffering. After much violence and near-death escapes, John recovers his son, and John, his wife and son survive. The story then returns back to present day on the space station with the interrogator, Corinne, now being able to actually see the ghouls. She is therefore convinced of the story of the toy box. Paul tells her that he has faith in the light and he then uses his magic and knowledge of light to blow up the toy box. He and Corinne escape on a shuttle.

In an early scene, The Duke strokes a white dove on his hand and gently pushes it so it will fly away. Large groups of eels are used in containers and these are seen in the ghoulish scenes.