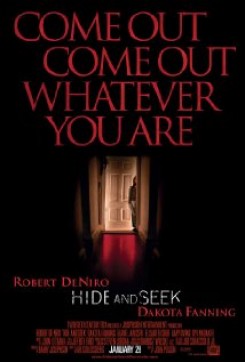 After his wife is murdered, David (DeNiro) and his daughter Emily (Fanning) move to a house in the country to try and rebuild their lives. Emily soon creates an imaginary friend named Charlie, and as her father and doctor help Emily deal with the loss of her mother, it becomes apparent that something sinister is happening in their idyllic hideaway.

Three grey Main Coon-mix cats were on call for the part of the family pet, Sebastian. The cat first appears in a crate in the back seat of the car as Emily says goodbye to her doctor. Later, when David opens Emily's closet door, the cat jumps out at him. While David brushes his teeth in another brief scene, Sebastian sits in the doorway watching him.

All three cats were familiarized with the actors before filming began. A trainer provided the travel crate for the cat and stood off camera as the cat sat in the parked car. When the car drove away, the trainer hid in the backseat next to the crated cat.

For the startling closet scene, an off-camera trainer held the cat on top of an unseen, three-foot-high dresser. When DeNiro opened the door, a second trainer standing off camera with food called to the cat, which then jumped from the dresser and went to him. For the later shot of Sebastian watching David, a trainer placed the cat on mark in the doorframe and waited just off camera.

A fake cat was used in the scene in which David finds Sebastian drowned in the bathtub and buries him in the backyard.

In the scene of Emily and David fishing, Emily picks up a wiggling insect and puts it on a fish hook. As she does this, a close-up shot shows liquid and guts coming from the insect. The props department originally made a fake insect for this scene, but it didn't look realistic to the director. As a result, 24 buzz beetles were brought in. For the beginning of this sequence, trainers used a real beetle with a fake blood sack attached to it very carefully with surgical adhesive. Fanning was taught how to handle the insect and where to place the hook without harming the beetle.

The production submitted a receipt for the dead butterfly that appears briefly in one scene.