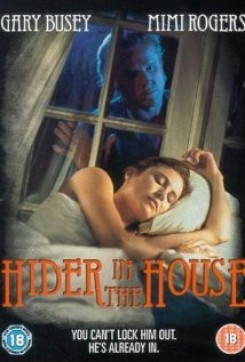 Hider In The House

After spending 18 years in the state hospital for the criminally insane, a murderer is released. He makes his new home in a secret room in the attic of a large home. From his hiding place he spies on the unsuspecting family and fantasizes about the loving home he never had.

When the family dog sniffs at a vent in the hider's room, the hider sprays deodorant in the dogs face (plain water was sprayed at the dog). A fake dog head was used to make it appear the dog had been buried in the back yard. During a struggle a gold fish bowl is smashed and the fish "dies". In the actual filming the fish was not harmed as the action was stopped so that the fish could be placed back in the water.