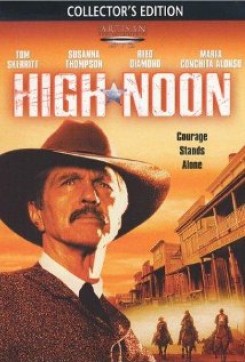 High Noon is a remake of the 1952 film classic starring Gary Cooper and Grace Kelly for which Cooper won an Academy Award. In this current version Cooper's role is played by Tom Skerritt as the sheriff Will Kane. Kane is marrying his sweetheart Amy (Susanna Thompson) but following the wedding he finds out that the man he had put behind bars, Frank Miller, (as played by Michael Madsen) is out of jail and seeking revenge. Instead of leaving town with his new bride, he is compelled to stay and confront Miller. Kane's decision makes Amy one very unhappy newlywed and she leaves town without him. The story continues with Will's confrontation and ultimate victory.

In general, the animal action in this film was quite moderate but several scenes were set up with the wranglers in rather interesting ways.

For example, Amy is shown driving the wagon down the street at a fast pace. Since she cannot drive a team of horses, she holds the reins loosely in her hand which then pass through her hand into the rear of the wagon to a wrangler hidden under a tarp. He can see under the seat, and drives the wagon in this manner for over 250 feet.

The film was shot in Canada and our International Humane Partners from the Calgary Humane Society were on the set every day to monitor the animal action. Based on their reports and our screening of the film, we have rated High Noon "Acceptable".