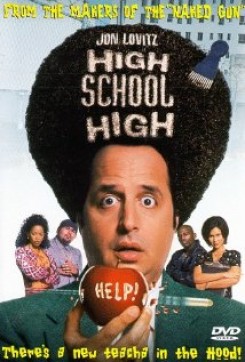 High School High is a story about Richard C. Clark, an idealistic young teacher, who leaves a prestigious prep school for Marion Barry High. The school, is a run down gang infested high school that is so tough, they have their own cemetery. The students are low life's who could care less about their education until Mr. Clark walks into their lives. Amongst the gangs, and guards with attack dogs, they have a principal who has given up on changing the students and their surroundings. But Clark is determined to make a difference. Clark gives the students some insight on how life could be if they were willing to change. He shows them that learning can be fun by relating history, mathematics, reading, etc., to something that they are familiar with, rapping. As the students rap their way through their text books, it enables them to remember the facts necessary for their final exam. The year before, there were only two graduates, but after Clark's inventive teaching technique, six students graduate from school. Clark becomes a hero in the eyes of his students and his new found love, Victoria.

In an early scene, as Victoria is showing Clark his new classroom, his foot falls through the floorboards and three rats are seen crawling out. One of the rats crawl onto Clark's pant leg. He gently shakes his leg and the rat crawls off. For this scene, two trainers were under a raised platform and placed the rats onto the actors pant leg which at the time, was down in the hole. Another trainer, on top of the platform, was behind the actor and retrieved the rats when he raised his leg out of the hole. There is a scene at the welcome back to school dance, where a dog at the entrance of the auditorium, growls and barks at a former student. The student looks at the dog and the dog whines and lies down. The trainer, just off camera used a burlap cloth and an arm pad to play with the dog which prompted him to growl and snarl. When the dog lies down, the trainer cued the dog with hand signals. One night, Clark is looking for one of his students and his search ends at a bar with exotic dancers. While talking to his student, Clark sees a silhouette of a dancer dancing behind a screen. As he continues to watch her, he sees a dog's silhouette as he jumps up to the front of the woman placing his paws on the dancer's shoulders. The dog then acts as if he is trying to mate with her. This particular behavior is a pre-trained animal stunt that the dog has done before. Trainer #1 held the dog while trainer #2 showed the dog his mark. Trainer #1 released the dog as trainer #2, using verbal commands, cued the dog to "go target." The dog then went to the target and simulated a humping motion. There are two scenes where a cat is seen with Clark. In one scene, Clark is at Victoria's apartment and a white cat is seen on the bed being stroked. Then later, a tabby cat is seen sitting on the back of the couch as he and Clark watch a video on birds. For the scene with the cat on the bed, the trainer had merely placed the cat on the bed and using verbal commands, cued him to stay. When the tabby cat is on the couch, two trainers were used. Trainer #1 placed the cat on his mark and then trainer #1 moved to one side of the room while trainer #2 was on the other. To get the cat to look in different directions, the trainers used verbal commands to get the cat to look to their side of the room. Other animal action consists of guard dogs at the school being walked by guards, and a flock of pigeons seen in China town flying away as a group of people walk near. There is also a brief scene where a chicken is seen flying from a rail to a balcony at a restaurant as Victoria walks by. The chicken was pre-trained to fly from the rail down to the balcony when the actor walked by. In another scene, Victoria and Clark are at her apartment and Victoria trips and stumbles into the fish aquarium, her head landing inside. A fish is seen for a brief period just before Victoria's head lands in the aquarium. However, the fish are not visible when her head is actually inside the aquarium. For the scenes involving the guard dogs, the trainer placed the dogs with the actor and cued the dog to stay or walk with verbal commands and food.