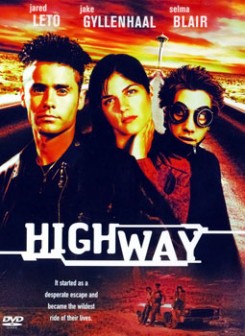 In this comedy, a young man is caught with his lover by her husband. He and his best friend pack up real quick and head out of town. They are beginning to enjoy their trip when they realize that the angry husband isn't too far behind.

There is a scene where a pit bull is standing on a chair, barking and growling. The dog grabs a man by the arm. The man takes off his jacket and the dog runs away with the jacket in its mouth. The trainer placed the dog on its mark on the chair and used a hand signal to get the dog to grab the actor's jacket sleeve. As the dog had the sleeve in its mouth, the actor took the jacket off and the trainer used another hand signal to have the dog exit with the jacket.

There are two different scenes that have pigeons in them. In the first scene, two pigeons fly out of the barn as the door is opened. A trainer held the homing pigeons in a release box and opened the box and released them as the door to the barn was opened. The other scene had over twenty five pigeons flying in the sky as people are running through the streets. Two trainers stood off camera and opened release boxes freeing the homing pigeons who managed to return safely.