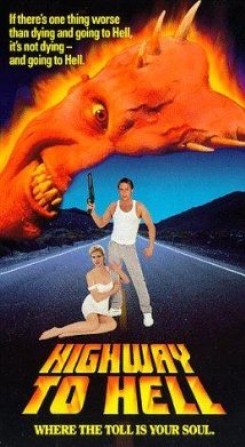 A macabre thriller about Charlie and his fiance, Rachel as they are eloping to Las Vegas. While driving down a lonely desert highway, Hellcop, a monster cop from hell stops them and kidnaps Rachel. Charlie is forced to descend into hell in order to bring her back. With the help of an old man, Charlie must believe he can go down "the road within the road", which is the highway to hell, get Rachel and return to our world within 24 hours.

Mr. Ben, the dog, is seen throughout the movie as Charlie's companion. In one scene, as Hellcop is trying to steal Rachel away, Mr. Ben leaps for Hellcop's throat, is knocked away and flies through the air to the ground in a silent heap. This scene was shot in cuts. Mr. Ben is seen as he starts to jump. When he is struck, it is actually a fake dog that flies through the air and lands on the ground. Other animal action is mild, such as Mr. Ben sitting, lying down, barking and walking.