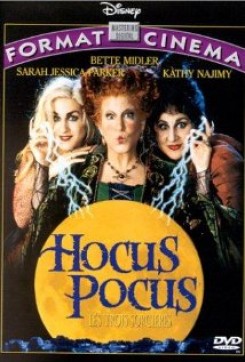 Hocus Pocus is a spooky, spooky fantasy for family audiences. The story begins in Salem, Massachusetts in 1692 where we meet Winifred, a witch, and her two sisters. These three witches cast spells on children and drain them of their life force so that they may remain forever young. They are put to death, but before they die, they cast a spell on Thackery Binx, the young man responsible for their demise. They turn the 13-year-old Binx into a black cat who is destined to live forever. Through the centuries, Binx stands guard over the witch's house to make sure the witches are not resurrected. The story then flashes forward to present day Salem. It is Halloween and teenager Max is escorting his kid sister, Dani, on her trick-or-treat rounds. When they stop at the home of Allison, a rich teen who is bored with her parents' party, she suggests they visit the witch's house for excitement. Legend has it that the bones of one hundred children are buried there. Once inside the witch's house, strange things begin to happen and the three young people inadvertently release the witches from their three-hundred-year sleep. With the help of Binx, they manage to escape the witch's house, taking the witches' magic spell book with them. The witches will cease to exist at dawn, unless they can mix a magical brew from a recipe in the spell book. Strange and wild antics ensue as the witches desperately seek the spell book.

Binx, the cat, is seen throughout the film. So as not to tire any single animal, several cats played the role. Cats with varying skills or personalities would be used for different scenes. In addition to being present on the set, AHA was there for some training and preparation of the cats. There are many scenes where Binx actually talks. This was accomplished with the use of a special effects animated cat head. When the children first meet Binx at the witches' house, Binx surprises Max by jumping on him and Max falls down. To achieve this scene, one trainer released the cat, while a second trainer called the cat by way of a buzzer hidden in the actor's clothing. The cat had been trained to respond to the buzzer, with food as a reward. The cat does a similar stunt when he jumps on Winifred's shoulder as she grabs for the cat saying "Get it off!". A stunt double substituted for the actress in part of this scene, and the scene was shot in cuts. The cat did the jump responding to a buzzer and the stunt double held onto the cat while spinning around. Although it looked as if the actor was trying to get the cat off, the cat was actually being held onto. In a scene where Binx is run over by a bus, you don't actually see him hit, but you see a flattened cat on the pavement. The cat then re-inflates into a living cat again. This scene was shot in cuts and was accomplished with a fake cat and a special effects cat, in addition to the real cat. No vehicle was close to the real cat. Where a cat runs up a tree, the cat was released by one trainer and called to a second trainer into the tree by way of a clicker and a food reward. When one of the witches has Binx in a bag, no cat was really in the bag. The bag was made to move by way of a gadget called a motion-maker. In a climactic scene, Binx runs up a tree to attack Winifred, who is suspended in the air about ten feet off the ground. He jumps on her and she tosses him off. He flies thought the air to the ground, where he hits his head on a rock and dies. This scene was shot in many cuts. Various shots were made of the cat running from point A to point B on logs, branches, etc. The cat was then filmed jumping off of a branch and onto a platform, a distance of about six feet. Trainer #1 would release the cat as trainer #2 called to the cat and the cat jumped on the platform over the camera. A trainer then placed the cat on the actress's shoulder where the cat swatted at a small vile in her hand, which the cat had been trained to do. To get the effect of the cat sailing through the air after Winifred has flung him to the ground, a trainer held the cat on a platform and then released him. The cat then jumped six feet onto a large stunt pad. A fake cat was used to portray the dead Binx. The cat has many other basic actions throughout the film, and in all cases the cat would be released by one trainer and called to a second trainer by way of verbal cues, visual cues, or a clicker, with food as a reward. In other animal action, a Yorkshire Terrier chases the three witches out of the house. To achieve this, one trainer released the dog as the actors ran out of the house. Once outside the house, a second trainer gave the dog a verbal cue to stay and bark, which he did. In an opening scene, animals appear restless when a horse pulls at his reins and chickens run in a yard. To achieve this, a horse was tied loosely to a tree and when the handlers waved plastic bags, the horse pulled at its lead. For the chickens, grain was placed in their pen and the wranglers moved around, causing the chickens to scatter. American Humane was on the set throughout filming. Animal action filmed in Salem, Massachusetts was monitored by the Animal Rescue League of Boston.