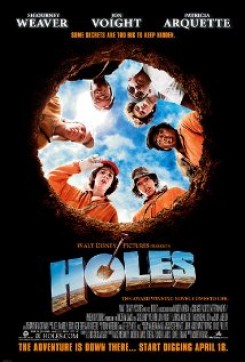 Stanley is accused of stealing Clyde 'Sweet Feet' Livingston's shoe donation to a local orphanage. The judge lets Stanley pick where he wants to go to serve his sentence - jail or Camp Green Lake. Stanley chooses Green Lake, where he and the other young inmates are forced to dig large holes in the desert every day, by order of the mysterious Warden (Sigourney Weaver). The boys who all have nicknames like Caveman and Zero, are told it will help them build character. However, Stanley soon finds out that there is another reason why the warden wants the holes dug. She is trying to recover a buried treasure.

In the beginning of the film, there is a rattlesnake on the ground near the holes that the boys are digging. One of the young men walks up to the snake, puts out his bare foot, and the snake bites him. A trainer put a bull snake, which is a non-venomous snake, down on the ground and put a box over it to contain it before filming began. The trainer removed the box and the actor walked over near the snake and put his foot out. The director yelled, "cut" and a trainer replaced the Bull snake with a real rattlesnake and doubled as the actor, putting his bare foot near the snake. Several trainers stood just off camera holding nets and snake hooks just in case the snake decided to wander. The snake was immediately retrieved by a trainer and removed from the set.

One of the boys nicknamed Caveman finds a scorpion crawling on his bed. A trainer set the scorpion on the bed and stood just off camera. The trainer touched the scorpion lightly with the end of a straw and it lifted its tail up. Then the trainer blew some air through the straw and the scorpion began to crawl. When the scene was over the trainer retrieved the magnificent insect.

Nine Bearded Dragon lizards were on call for the parts of the lizards in the film. A non-toxic children's finger paint was used on the lizards to make them appear bright in color. Computers helped create some of the lizard action and production created fake life-like lizards for some of the other scenes.

One night, Mr. Sir, who works for the Warden, shoots a lizard that is crawling on a wall behind one of the young men. A tarp was placed over the wall and a trainer placed the lizard on the tarp in order for it to be filmed. This was later inserted into the film. The lizard was never present during the gunfire.

Another character, Kate, sits against a turned over wooden boat when a lizard crawls out from under it. She picks it up, puts it on her arm and the lizard bites her, then continues to crawl on her. In a later shot of Kate slumped over dead, the lizard is on her lap. A trainer hid under the wooden boat and cleared away the dirt from a hole in the hull so it was easier for the lizard to crawl out. The trainer released the lizard through the hole and another trainer stood on the other side, just off camera holding a flower that the lizard likes to eat in order to entice the lizard to crawl in that direction.

Toward the end of the film when Caveman and Zero are digging and find the buried treasure, several lizards are in the hole with them. The tenacious reptiles crawl all over them and the dirt. A combination of real and fake lizards where used for this scene. The young actors spent some time with the trainers learning all about the lizards and how to handle them. Then these two brave actors let the lizards crawl on them as they pretended not to care. The lizards were all contained in the hole and it was surrounded by trainers who stood off camera with nets just in case any strayed.

A donkey named Shadow played the part of Mary Lou. The donkey was hitched to the cart by a trainer and was very comfortable pulling the lightweight wagon. Whenever possible, a trainer would double for the actor when driving the cart. In fact it was hard to get the donkey to stand still for some scenes, so the trainer had a wooden post put in the ground and tied the Donkey's halter to it for some scenes. In the scene where Sam feeds an onion to the donkey, a real onion was used, but the bulb was removed and some grass was used to tie the greens together. A fake donkey was used when Mary Lou is shown lying dead on the ground in one scene.

The scene in which mounted riders set the schoolhouse on fire was rehearsed several times. A special effects fire bar was used to control the fire in the school. Some riders are seen holding lit torches in their hands as they ride up to the school and throw them at the building. Stunt riders doubled as the actors whenever possible. The torches were about 3 1/2 feet long and were made from bamboo and wood. Some cotton soaked in lamp oil was attached to the top of the torch with wire and lit. As the torches were tossed to the ground, nearby crewmembers grabbed them and doused them quickly. The horses were all experienced stunt horses used to working around fire.

The mysterious Madame Zaroni narrates the story of a curse while lots of animals mill around in the background. There are chickens wandering about the yard and also some in cages. There are horses pulling wagons or tethered to posts outside of buildings in town. Pigs are sometimes walking around freely and sometimes in a pen. Cows also graze in the background of some scenes. All of these animals were accompanied to the set by trainers. They were put on their marks, and in most cases just did what came naturally to them. To insure their attention, the trainers would scatter food around right before filming began. Trainers properly secured all animals to the wagons and made sure the weight was light.

During one scene, we see a young man carrying a baby pig. Then the pig is drinking from a steam and then the young man is pulling a full-grown pig by a rope. The pigs were not babies, but older pigs that were small. A very large pig acted as the full-grown pig being led by a rope at the end of this scene. The young actor was shown how to handle the pig ahead of time by the trainer. The stream was very shallow and was checked out ahead of time by the trainer to make sure it was safe for the pig and the young actor to walk in and drink from. Another grown pig appeared at the end of the scene to make it appear as if the piglet was now grown. A trainer attached a halter that fit around the pigs' front legs and neck. The young actor was given the end of the rope, which he held while delivering his dialogue. The actor then gently tugged on the rope to get the pig to walk with him. A trainer stood off camera holding a bucket of grain and calling to the pig to encourage it to walk in that direction. The sounds of the pig squealing and grunting were sound effects added in during post production.