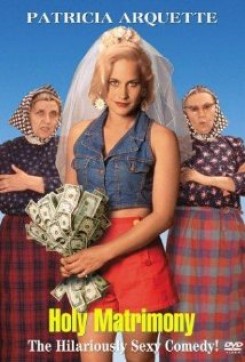 Holy Matrimony tells the story of Havana, a sexy, street-smart woman and Peter, her current lover, and how the pair try to pull off a robbery at the amusement park where they both work. After robbing the safe at the amusement park, Peter and Havana flee to Canada. When Peter makes a trip into town, he realizes that he was caught in the act of taking the money by a hidden video camera and that his name and face appear in all of the newspapers. He returns to the hotel room where they have been staying and packs up the unwilling Havana and the money. He informs Havana that he will be taking her to the Hutterite Colony where he was raised. Since there are no phones, televisions, radios or newspapers there, he figures they will be safe until he can devise an alternate plan. Havana loathes this idea, but since Peter has hidden all of the money, she has no choice but to stay on with him. Peter and his 12-year-old brother, Zeek, go into town one afternoon where Peter proceeds to consume too many beers. On the way back to the Colony they are involved in an accident which leaves Peter dead. According to Hutterite law, the brother of the husband is to marry the widowed wife. Havana, knowing that the only way she can stay in the Colony, and find the money, is to marry the 12 year-old Zeek. We watch as this very unlikely couple try to make the best of an extremely awkward situation.

Animal action was minimal. In one scene Zeek runs into the animal area of the amusement park where cattle are kept. The cattle were acquired from a local farmer for this scene and returned after filming. In another scene Havana is seen in the hen house surrounded with nesting chickens. Chickens are also seen in two atmosphere scenes around the colony. These scenes were filmed on an actual farm.