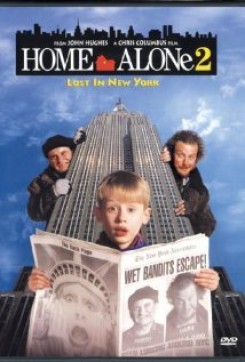 In this sequel to the original comedy hit, our young hero, Kevin, exercises his hilarious solo survival skills in The Big Apple. The story begins in Chicago, where Kevin's family is packing the suitcases for a trip to Florida to spend the Christmas holidays with Grandma. They oversleep the morning of their flight and make a frantic dash to the airport with only minutes to spare. While running to their departure gate, they become separated and the family just makes it onto their Florida flight, while Kevin mistakenly rushes onto a flight headed for New York City. When he realizes what he has done, Kevin decides to look upon the mix-up as a great opportunity. The precocious adventurer has his father's credit card and manages to get himself booked into a luxurious suite at the Plaza Hotel. After settling in at the Plaza, he decides to see a little of New York and wanders into a large and lavish toy store on Fifth Avenue. In the meantime, Kevin's adversaries, Harry and Marv, have managed to escape from prison and have concocted a plan to rob the toy store on Christmas Eve. The pair spot Kevin in the store and give chase in a hilarious cartoonish pursuit.

Most of the animal action involves trained pigeons flying point A to point B with food as a reward. For the grand finale scene a total of five hundred pigeons were on call with only about 200 used at a time. Pigeons were alternated to allow them to rest and to avoid stressing them. Representatives of American Humane were present for both training and filming with the pigeons. In an initial scene involving pigeons, one of the two villains chases a pigeon from a railing with the newspaper he is reading. It looks as though he is actually hitting the pigeon but he is not. He is just slapping the paper around without contacting any pigeons. The camera angle and the editing gives the impression that he is hitting them. The pigeons used in this scene had been trained as babies not to be afraid of paper. They had also been trained to jump over a box at the end of the scene so that it appeared as though they were flying up in reaction to the swatting paper. Kevin befriends a homeless woman in Central Park who feeds and cares for a great number of pigeons. The woman always has pigeons on or around her. The pigeons had been trained to just sit, so the trainer would simply place the pigeons on their mark. Some harmless masking tape, which could be easily removed, was taped to their wings to prevent them from flying away. Birdseed was also placed on the ground to keep the pigeons in a particular area. To get pigeons to fly from one point to another, trainers would place an empty cage on the ground containing food and gradually release pigeons from another cage. Pigeons would fly to the cage with the seed. The distance between the two cages was increased from about ten feet to a distance of about forty feet. For the climactic attack scene, in which the pigeon lady enlists hundreds of pigeons to come to Kevin's rescue, two stuntmen were used as stunt doubles for the two actors and the filming took place on a sound stage, not outdoors. Empty cages with food were placed out of camera range behind the two stuntmen. Pigeons were released all at once from four locations ranging from about forty to sixty feet away from the stuntmen. The birds were called to the empty cages and the stunt men fell just as the pigeons approached so it appeared they were knocked down by the approaching birds and the birds entered the empty cages. When the real actors were used, they had seed applied to their clothes and they were instructed to fall or sit first so the pigeons could land on them. This was done so that there would not be too much action when the actors and pigeons mingled. These precautions were taken so as not to frighten the pigeons, for if they were frightened they would not do what they had been trained to do. This scene was filmed over a period of days with a variety of camera angles, sometimes with just the pigeons alone and no people involved. The fireworks in this scene were well outside the flightpath of any birds and any gunfire that was used was a quarter load and the sound was augmented in post production. Because the scene was shot in many cuts, the film editor had much material to work with in order to create a very effective climax. Other animals seen briefly, strictly as atmosphere, are a dog on a leash and horse-drawn carriages in Central Park. Animal action was monitored by the American Humane Association with on set supervision by the Chicago Anti-Cruelty Society.