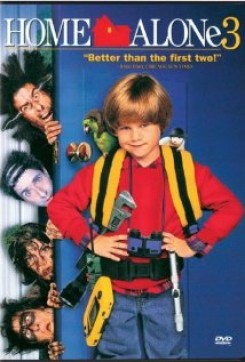 Home Alone 3 is a film about Alex, a young boy, home sick with the chicken pox, who finds himself defending his street against a group of mysterious new neighbors.

A mouse, Alex's pet, is seen throughout the film. Alex carries the mouse around in a camera case and it is frequently seen poking its head out of the opening or stepping in and out of it traveling from A to B, or sitting on top of the foot board of Alex's bed, etc. There is a scene where the mouse is crawling up a man's pant leg toward his crotch. A neighbor lady whacks the man's crotch area with a board. The mouse is not seen in the area at the time of the impact. The bird is sitting in the igloo atop a remote control car when it strikes a match, lighting a fuse. It then exits the igloo and heads back to the house. The bird was prepped prior to this scene. This scene was shot in cuts. The filming was done on a carpeted surface and inserted with the proper background during post-production. At no time was the bird under stress. It is a behavior trick the bird seems to enjoy very much. In another scene the bird and mouse are riding on the remote-controlled car. The car is seen moving in circles and in one shot, the mouse is shown hanging on with its front feet as the car spins into a half circle. This scene was shot in cuts. As with the bird, the shot of the mouse was obtained by filming on a carpeted surface and inserted with the rest of the shot during post-production. There is a scene where Alice, one of the strange neighbors, is walking a dog. Alice approaches Alex's house and attempts to peek into the window. In the meantime, the dog has wrapped its leash around Alice's legs. When the dog starts to move away, she is tripped and then dragged through the yard. The leash breaks and the dog jumps over a shrub and out of sight. This scene was shot in cuts. A stunt double was used for the actor with a separate leash attached to her leg from that of the dogs. A cable was attached to the woman's ankle and manned by two coordinators off camera. At the appropriate time, the coordinators pulled the cable, which lightly tripped the stunt double. To give the illusion of the dog dragging the stunt double, the dog had an extra long leash attached to his collar and ran beside the stunt double as the cable was pulling her. Later the dog is seen licking Alex's face as the boy removes the collar and leash. Afterwards, the dog runs through the yard, up a pile of wood and over the fence. This scene was shot in cuts. Baby food was applied to the actor's face and the dog was cued with verbal commands. The dog was released by a trainer off camera and ran A to B towards another trainer who was on a landing platform behind the fence. It ran up the pile of firewood which had been nailed together to prevent the dog from falling. The landing platform, on the other side of the fence, was only 2 feet below fence level. Other animal action consists of a bird sitting on a stand, sitting on a boy's shoulder, singing in the shower, sitting on the end of a gun etc. A grasshopper sits on a jar, and some goldfish are in a bowl. In one scene, the grasshopper is supposedly smashed by a basketball. A fake insect was used. American Humane was unable to be present on set. However, after conferring with the Production Company and trainers and screening the film, we are rating Home Alone 3 "Believed Acceptable".