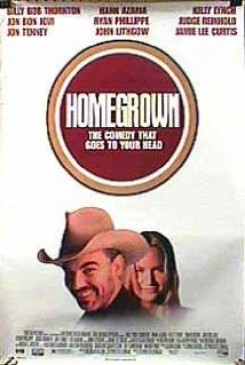 Homegrown is a film about three marijuana growers whose boss is killed around harvest time. The men decide to pretend that he is still alive and take over his business and harvest and sell the marijuana crop.

There is a scene where two dogs are running through the woods chasing a rabbit. This scene was shot in cuts. The dogs and rabbit were filmed separately. Trainer #1 released the dogs while trainer #2 cued them to their next mark with verbal commands and food as a reward. The trainer for the rabbit released it and let it run around naturally in a small area. In another scene, a poodle is held by a man and then placed on the ground, running from point A to B. This scene was shot in cuts. The trainer placed the dog with the actor and then later the actor placed the dog on the floor. The trainer cued the dog with verbal commands from one point to another.