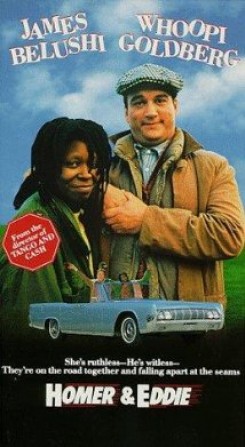 Homer and Eddie are two of societies discards. Homer is slightly retarded with a sweet and naive disposition. Eddy, short for Edwina, is tough with a vocabulary and disposition to match. This odd couple meet and become a team shortly after Homer's been robbed of $87, all the money he had. He's going to Oregon to see the father he hasn't seen for years and who is now dying. Homer hitches a ride with Eddy and she decides to drive him to Oregon. Enroute we learn that Eddie is an escaped mental patient who has an inoperable brain tremor that causes her to fly into uncontrollable rages.

Dogs, seagulls and a gerbil are seen briefly. As Homer and Eddie drive through a rundown section of a city, they pass a traffic accident where a horse trailer was involved. Two live horses stand near two dead horses. The production company had two dead horses brought from a rendering plant to the filming location and returned them after filming.