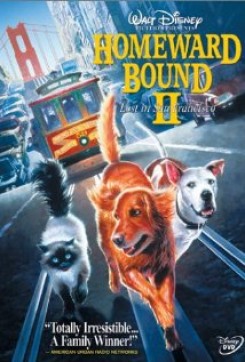 Homeward Bound II: Lost in San Francisco is the sequel to Homeward Bound: The Incredible Journey. In this follow-up adventure, we again find the three trusty companions, an American Bulldog named Chance, a Golden Retriever named Shadow and the prissy Himalayan cat known as Sassy, bonding together as friends and cohorts. These pets, as in their first journey, manage to become separated from their family of humans and have another incredible adventure finding their way home. When the Seaver family leaves their suburban home in San Francisco and takes off on a camping vacation to Canada, they also take along their pets, Chance, Shadow and Sassy. Once at the airport, the pets, loaded into airline carriers for the trip, begin to believe that they are going to be separated from their humans forever and they panic. As the carriers are being towed out to the aircraft, the animals manage to escape and run to find their family back inside the terminal. However, the Seaver's are now on the airplane heading for Canada and the animals are confused. Since they are pets and don't understand what is actually happening, they set off to find their way back home. Their journey through the streets of San Francisco brings them face to face with danger, mayhem and even puppy love. The resourceful animals again prove that will finds a way, even against great odds.