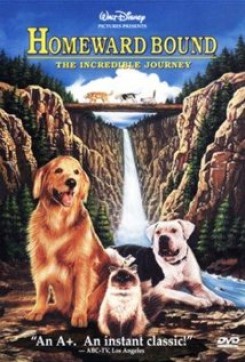 Homeward Bound: The Incredible Journey is an adventure story told by Chance, an American Bulldog, who is barely more than a pup. The orphaned Chance is adopted from the dog pound by a family and brought to live in their simple but happy home in the country. The family has two other pets, Sassy, a very feminine and snobby Himalayan cat, and Shadow, a mature Golden Retriever. The three pets are companions to the family's daughter and two sons. The children's mother, a widow, has just married their new dad and the entire household must adapt to new circumstances. Part of their adjustment means a temporary move to a small apartment in the city. Because their move will be for only a few months, arrangements have been made for their pets to stay on the farm of a friend during the interim. The children object to the separation from their pets but accompany their parents on the sad ride through the mountains to the friends' farm. At first the farm affords lots of excitement for the mischievous Chance, but Sassy and Shadow miss their family. When they are left alone for the day, Shadow decides to go home and convinces his two companions to go with him. He figures home is just on the other side of the mountain and that if they take a short cut up to the top and down the other side, rather than going through the twisting and winding road that brought them to the farm, they will be home. Shadow leads the way and Sassy and Chance follow on their incredible journey.